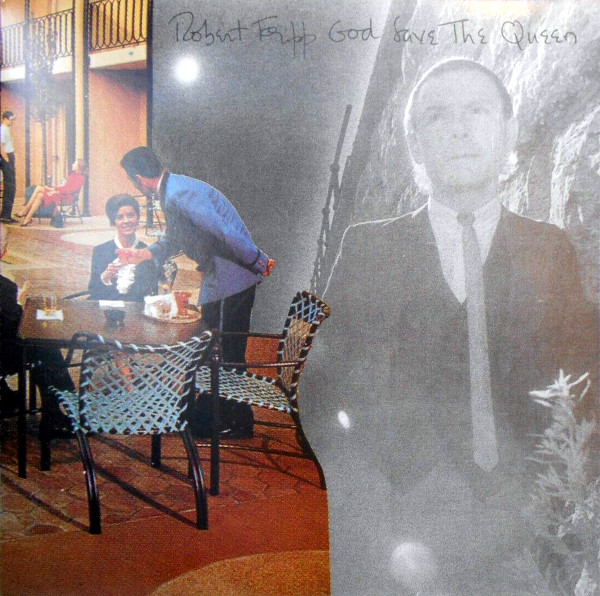 A half album each of Frippertronics and discotronics, the latter serving as a bridge between “I Zimbra” and Discipline.

So much for the middle of the road. Robert Fripp took a calculated left turn with God Save the Queen/Under Heavy Manners, dividing his second album into two halves, one half featuring Frippertronics (God Save the Queen) and the other half featuring Frippertronics with a rock rhythm section, dubbed discotronics. David Byrne also sings on one track, Under Heavy Manners, credited as Abalm el Habib.

Frippertronics are an acquired taste: mesmerizing (some might say soporific) tape loops of electric guitar that approximate Brian Eno’s own tape loop experiments (think Discreet Music but more, um, buzzy). Evening Star also introduced the idea, but Fripp had since refined his technique by the release of this album. Let the Power Fall further refined it, or wore the point down to a nub, depending on your point of view.

It’s easy to hear “Under Heavy Manners” as a continuation of “I Zimbra” (from Fear of Music) and a foreshadowing of King Crimson Mk. II. The Zero of the Signified also serves as a rudimentary blueprint for the soon-to-be-reconstituted Crimson. The first side of music, however, is much more soothing in effect, including a very clever reworking of God Save the Queen. In fact, the whole of side one (and the last five minutes of side two) forms a fitting bookend to Discreet Music.

Stylistically, God Save the Queen/Under Heavy Manners falls in between The League of Gentleman and Let the Power Fall. Fripp’s second solo album isn’t completely novel (listeners of Exposure will have already been exposed to some of this in “Water Music/Here Comes the Flood”), but it is an excellent companion to Discipline and Beat and remains one of my favorite Fripp albums.

All songs written by Robert Fripp.