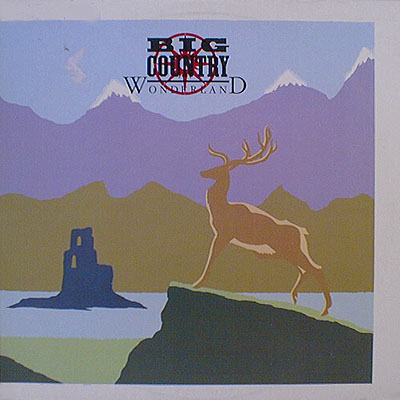 It wasn’t as big a hit as “In A Big Country,” but “Wonderland” did fill the gap until Steeltown arrived.

Kronomyth 1.5: With innocence within ourselves, we sing the same old song.

The story of the EP, in which nearly nothing is learned of wonderland…

At the tony orlando and dawn of the ‘80s, music only existed in one of three forms: cassette, elpee or single. 8-tracks were dead, reel-to-reel was never alive. Each medium had its own consumer: elpees were for the devotees, cassettes for the mobile masses, singles for the fickle stylemongers. And each medium had its respective place in the store: elpees in long and labelled columns (vinyl people are very organized and delight in the tactile experience of touching album spines), cassettes in bland stacks with the label clearly identified (busy, busy, got it), singles in the front of the store (since you know they’re going to walk up to the counter and immediately ask where they can find the song “I Want Candy” or whatever’s on the radio that week, which allows the clerk to simply point to the display next to the counter).

All of this to set the stage for the story of the EP. You see, an EP was actually an inflated single; intermediary product marketed as a mini-album that allowed record companies to reach their most loyal consumers (elpee buyers) in between albums. Vinyl enthusiasts would encounter these in their spiny travels with a giant sticker that said $4.99 or $5.99, almost half the price of an elpee. While EPs have added greatly to the work of discographers ever since, they haven’t accounted for much great music.

Take Wonderland, for example. It’s only half new: “Wonderland” (in case you didn’t make the connection) and “All Fall Together.” The second side of Wonderland consists of two old (relatively speaking) B sides, “Angle Park” and “The Crossing” (which actually did not appear on the album of that name, in case you made the connection). They’re fine, insofar as any four songs from the band’s early albums burn with the same fire, but Wonderland the EP can’t hold company with The Crossing and Steeltown. It’s an appetizer, half of it made from leftovers. Steeltown, now that’s a meal.