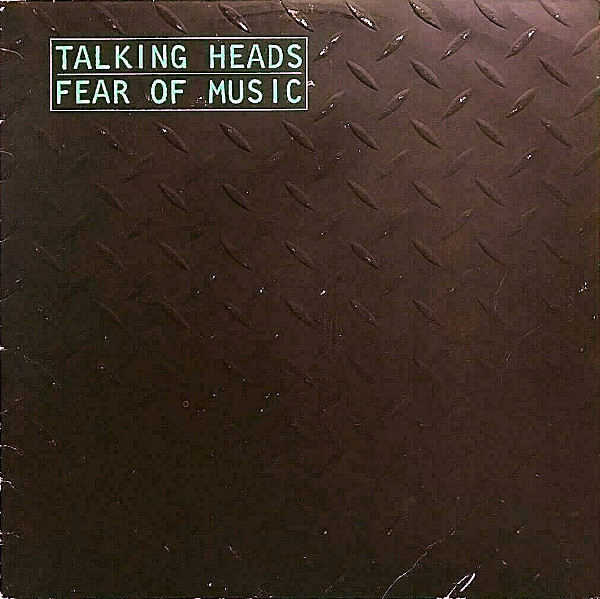 The best album of 1979? Melody Maker thought so, and I’m inclined to agree.

David Byrne sums it up at the end on Drugs: “I’m charged up/I’m kind of wooden/I’m barely moving/I study motion/I study myself/I fooled myself/I’m charged up/It’s pretty intense.” In fact, Fear of Music is very intense: a control freak out of control planning the next revolution, battling with his ego in a wasteland of drugs and disappointments, the gears of his internal machinations spinning toward entropy, all splashed against a canvas of deconstructed funk riffs while clinging to an almost childlike belief in the power of pop music and absolute good

This is far and away Talking Heads’ greatest artistic leap of faith, even if they were goaded to jump by Brian Eno. It begins with I Zimbra, a song that, once heard, can’t be unheard. It’s as though Fela Kuti were re-imagined in a digital jungle with Robert Fripp’s distinctive Frippertronics providing the ultimate futureshock. (Fripp liked the results so much that he used this sound as a launching point for the reconstituted King Crimson.) This song also points forward to the next installment of the Heads, Remain In Light. If Fear of Music contained nothing else, it would be a classic record for this track alone.

Of course, it contains a lot more great music. There are the hits, Cities and Life During Wartime, driven by the manic urgency of a man driven to distraction in the modern world. And then there are all those single-word songs that reveal Byrne’s new minimalist approach: Animals, Mind, Paper, Drugs, Air, Heaven. They spoke of the artist wrestling with himself (“Paper”) and struggling to relate to the world around him. Paranoia and isolation fuel much of Byrne’s internal dialogue, whether it’s his comical distrust of animals (“Animals”), his inability to communicate (“Mind”), his vulnerability to the very air (“Air”) or his unwillingness to swallow the blue pill of inner peace (“Heaven”).

There are many minor epiphanies on this album, but none are quite so shocking as the clarity that comes at the end of Memories Can’t Wait. For most of the song, Byrne is crowded out by his inner voices but, in the closing moments, he’s left with himself. It’s a terrifying moment, this realization that the madness is internal and inescapable, that the greatest enemy to reason might be our own mind. I would call this the climax of the album. Everything seems to be building up to this moment, and everything that comes after seems almost trivial by comparison.

At the time, Fear of Music was a high-water mark in music. Melody Maker named it the year’s best album. College students clustered around it. Few, however, could have imagined that this was just a warm-up of what was to come…