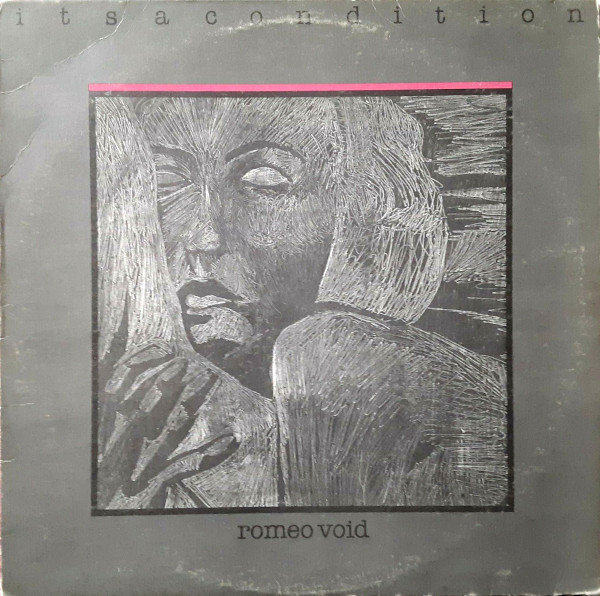 A little punk, a little Patti Smith and a whole lot of lead singer sum up the appeal of this San Francisco-based band.

Kronomyth 1.0: I will kiss thy lips, haply some poison yet doth hang on them.

In the wake of Patti Smith and Television, dozens of bands emerged who followed the same taut, edgy, poetic path into the fringes of a new musical expression that didn’t even have a name. Some called called it punk music, others new wave, but those lines were still being drawn and re-drawn. Surely, Howard Jones and Dead Kennedys didn’t belong in the same category, and so something had to be done (enter the nameberers).

Romeo Void was one of several acts on the fledgling 415 label that took their inspiration from Patti Smith Group: Pearl Harbour and The Explosions and The Nuns were others. Romeo Void had the biggest hit of any of them, “Never Say Never,” which you won’t find on their debut album, It’s A Condition. But you will find songs that approximate the same energy, as well as a few atmospheric turns down darker avenues. All in all, the band’s first album distinguished them as a talented group with something to say and a charismatic spokesperson in Debora Iyall.

The record opens with what should have been their first single, Myself to Myself. It has the sort of tension-release verse/chorus you’d find on a R.E.M. song from this period, and the group manages to weave the sax into the song effectively. (It wasn’t for nothing that the sax player was usually the first one to get booted in a new wave band.) Nothing for Me follows a very different line: tribal drumming (perhaps a nod to Iyall’s Native American roots) and squawking sax. By Talk Dirty (To Me), a pattern emerges where Frank Zincavage and Peter Woods provide a basic melody and Iyall sings her poetry on top of it, with predictable results. Iyall remans the focal point for most of these songs, but she’s up to the task. Even the title of Love Is An Illness sounds like a Talking Heads song (another band influenced by Patti Smith), while White Sweater brings everything to a dark, almost terrifying close (with shades of X this time).

Charred Remains is a deceptive title; Iyall’s pretty, breathy performance is the kind of thing that got people excited about this band. Confrontation is a tight, catchy song that reminds me of early XTC or Joe Jackson, if not quite so kinetically charged. Drop Your Eyes and Fear to Fear are filler, more or less, but the closing I Mean It is the album’s grand sonic statement, totaling nearly six minutes and featuring some epic sax work from Benjamin Bossi. He was one of the best sax players from the early punk/new wave acts, back-handed compliment that it probably is.

It’s A Condition didn’t benefit from a big hit the way that Benefactor did, and producer David Kahne, while competent, was no Ian Taylor. Still, it’s an artifact of the times that has aged better than most. Iyall filled the shoes of poet-priestess-temptress with her own, unique personality, and the group stuck around long enough to shake the one-hit wonder label with two bonafide hits.