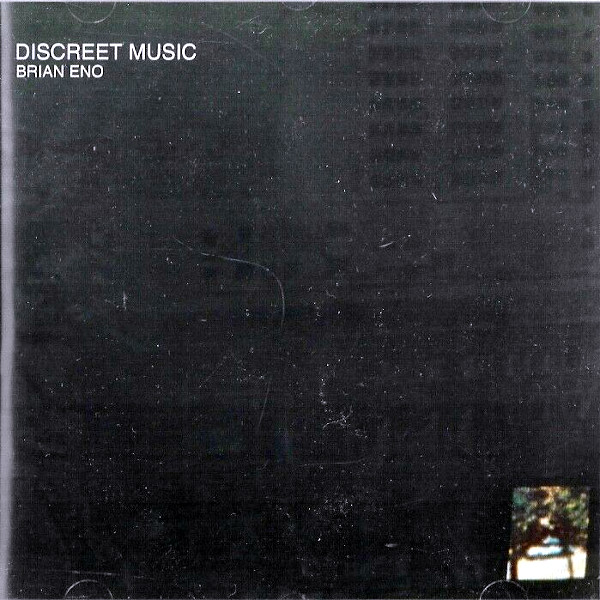 Eno is struck by the inspiration to create music as environment rather than entertainment. Technically, struck by a car first, and then inspiration.

Standing on the beach on a foggy day, I’ve heard the foghorn of passing cargo ships as a profound and solitary “I am” hurled against the vastness of the ocean (the bay, in reality, but that’s not nearly so poetic). It is a declaration of existence, adventure, futility, freedom and imprisonment; a song of the human condition wrapped in a single sound. Discreet Music is that sound realized as a symphony.

Brian Eno’s idea was to create ambient music that, true to its name, would insinuate itself into the listener’s environment, who could in turn choose to listen to it or ignore it and let it recede into the background. The fascinating thing about Discreet Music is that it does both: one moment, you’re listening to it intently, the next moment you find you’ve drifted off into the deep waters of different thoughts. Eno tries to reduce the magic of it to science with a little diagram on the back cover explaining how his synthesizer was processed through an equalizer, echo unit and delayed tape recorder to achieve the effect. Science be damned, this is musical sorcery of a most bewitching kind (although I’ve since discovered Kraftwerk‘s Ralf and Florian as the original source of sorcery).

The second side of Discreet Music is Eno’s treatment of a chamber performance of Johann Pachelbel’s Canon in D Major, cut into pieces and tied together in a post-modern piece of art that is mournful, grotesque and beautiful all at once. In the traditional sense, Discreet Music really isn’t music, and this is where Eno’s peculiar genius pays off: blurring the distinction between sound and music while drawing listeners into a unique and compelling musical environment. While many have pointed to Music For Airports as the definitive ambient work from Eno, Discreet Music made many of those discoveries first and remains for me the most brilliant example of his ambient experiments.

All compositions written by Brian Eno.

Brian Eno (electronics) with Gavin Bryars (conductor & arrangements on B1), The Cockpit Ensemble (B1). Produced by Brian Eno; engineered by Peter Kelsey.