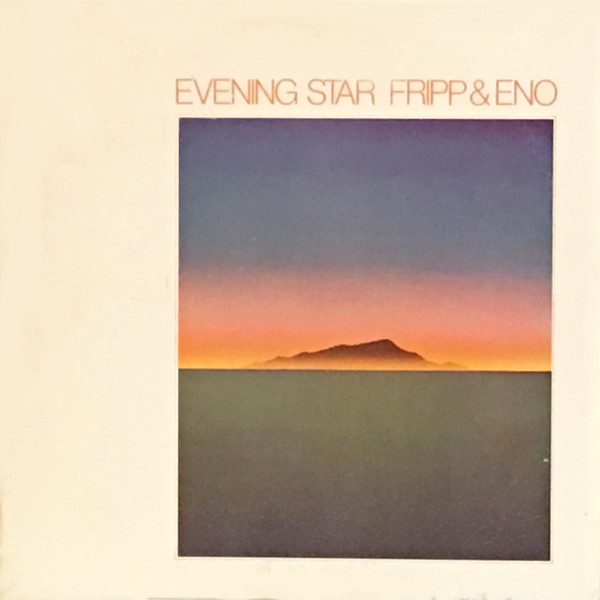 Fripp and Eno return for another album of soothing electronic loops on side one, and dark electronic space music on side two.

Robert Fripp and Brian Eno released a second album of ambient music, Evening Star, that reflected a further refinement of the musical textures set forth on No Pussyfooting. The most audible difference between this record and their last collaboration is the soothing rhythm of the tape loops used by Eno, an idea he would more fully explore on Discreet Music. These waves of sound set the tone for the five pieces presented here, with Fripp’s guitar wafting on the meditative calm rather than stirring it as before.

The opening “Wind on Water” (originally recorded live in Paris but with no “external” noise) is an object in musical meditation, with tiny tonal waves of sound that enhance the listener’s comprehension of the original Om. “Evening Star” is the album’s highlight, showing the soothing union possible between the two artists–in many ways, the same sort of matchmaking reappeared with Harold Budd on The Plateaux of Mirror. “Evensong” returns to the shiny sound of “Swastika Girls” in a much shorter and melodic context, and “Wind on Wind” is essentially a minor variation on the theme to “Discreet Music.” The side-long “An Index of Metals” is as eerie as the first side is intimate, shimmering in the remote regions of space like the contemporary music of Tangerine Dream but static.

Evening Star is more tightly conceived than their somewhat free-form first collaboration, benefiting from Eno’s budding ability to create short, effective ambient structures. In terms of scope and effectiveness, it gets the nod over No Pussyfooting (which nevertheless is notable for breaking new ground) and belongs with both artists’ better instrumental works.

All songs written by Fripp & Eno unless noted.