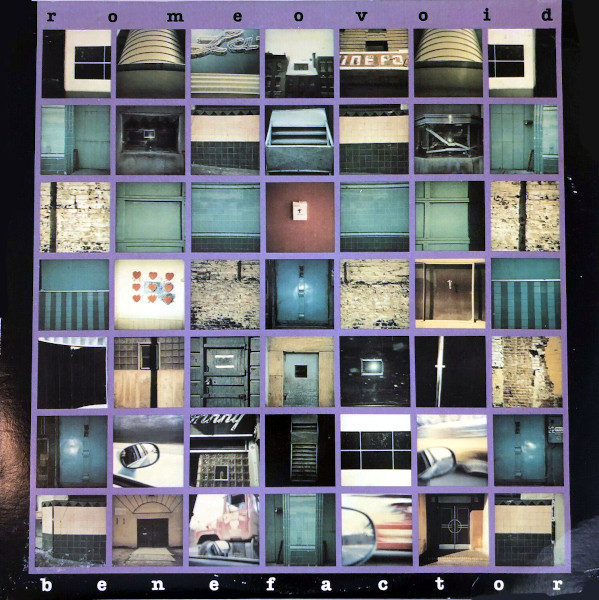 Kronomyth 2.0: You used to smile when I walked in the door.

Romeo Void’s second album is the beneficiary of a tightened-up version of Never Say Never that stands as an early new wave classic. The rest of the album, unfortunately, falls apart after that. There are times when you’ll be reminded of Talking Heads, Blondie, Modern English and R.E.M., but rarely without being reminded how much better those bands were (okay, maybe not Modern English). These days, you can just download the edited version of “Never Say Never” and save yourself a few minutes and a few dollars.

There was something exciting and unexpected about the band’s first album, It’s A Condition. Maybe it was the rawness of the poetry and music. The band’s second album, Benefactor, is a slick followup produced by Ian Taylor (The Cars) that sounds great but lacks the personality of their debut. The closest thing to a second single is the “Never Say Never” soundalike, Shake the Hands of Time. The rest of the record is vaguely noirish and largely forgettable. The closing S.O.S. is an exception, a dreamy song showcasing Benjamin Bossi’s saxophone in an atmospheric setting that reminds me a little of Japan (the band). The decision to put two of the album’s best tracks at the end and serve up a lame remake of Sam & Dave’s Wrap It Up as the second track is baffling; the band deserved better.

Part of the problem, I suppose, is what to do with a rock band with a female lead singer. The music industry had few references points: Patti Smith, Blondie and then, I don’t know, Linda Ronstadt? The Patti Smith edginess is absent on Benefactor, although the band does a pretty good Blondie impression on the Rapture-styled Undercover Kept. The saxophone is the other square peg, since no one really invited it to the new wave party, it just sort of showed up and usually left early (cf. Psychedelic Furs). So, what shows up for Benefactor is a female singer, a sax player, three-fifths of a slightly edgy rock band and a top-notch producer who does the best he can with what is frankly not the band’s best material. I mean, Debora Iyall is a compelling presence, but no so compelling that the band can get away with playing “Peter Gunn” behind her (Ventilation).

After Benefactor, the band faded back into the woodwork for a while, re-emerging two years later with a new album and without original drummer Larry Carter. At least they outlasted Pearl Harbour and The Explosions. Theirs was a small niche to begin with, and they filled it with three albums that collectively equaled fifteen minutes of fame, four of which you’ll find here.