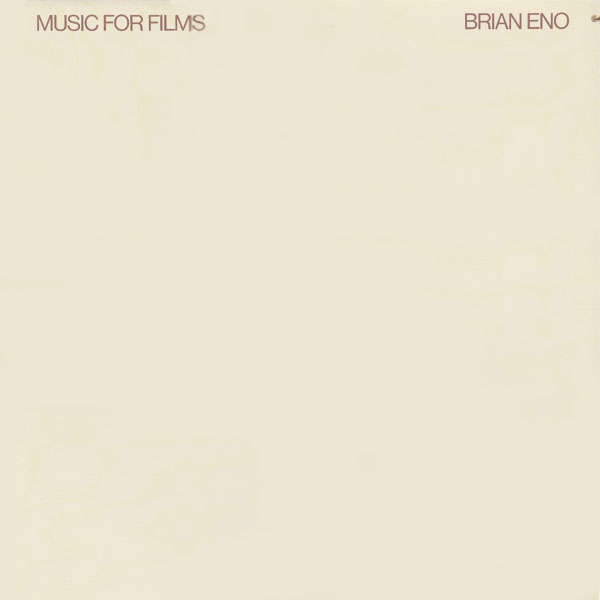 Ambient bits and pieces create a kind of Whitman’s Sampler of wispy works.

If you enjoyed the short ambient pieces on Another Green World and Before And After Science, you weren’t alone and you were about to get more company. Music For Films collects 18 short ambient works recorded between 1975 and 1978. The title is deceptive, since only a handful of these songs (“Slow Water,” “Alternative 3,” “M386”) were originally used in films, such as Derek Jarman’s Jubilee and the fake documentary film, Alternative 3. For years, my reaction to this album was cool; I saw it as a cabinetful of curios rather than a self-standing album. But the only deficiency in the work is its brevity.

The songs are tantalizingly short to a fault, dissipating like vivid dreams at the waking edge of sleep. A handful are long enough to create self-sustaining environments, notably “Events In Dense Fog” and “Final Sunset.” Most appear and disappear, a procession of fantasic ghosts, autumnal and astral. “Slow Water,” “Quartz” or “Strange Light” are examples of pieces that could have been captivating over the course of twenty minutes. Brian Eno himself seems to have conceived the album as a collective listening experience, going so far as to alter the track order slightly on the Editions EG reissue for better continuity.

While a wider picture doesn’t emerge from Films, the album remains entertaining and (perhaps more importantly) edifying as a sketchbook of ideas from (arguably) the artist’s most fertile creative period. The effect is far different than the meditative Discreet Music, yet the pair make a brilliant set of bookends in Eno’s ambient literature. I’d highly recommend the CD route, as it gives you the option of putting this on a random loop and extending its original, limited borders to a broader vista.