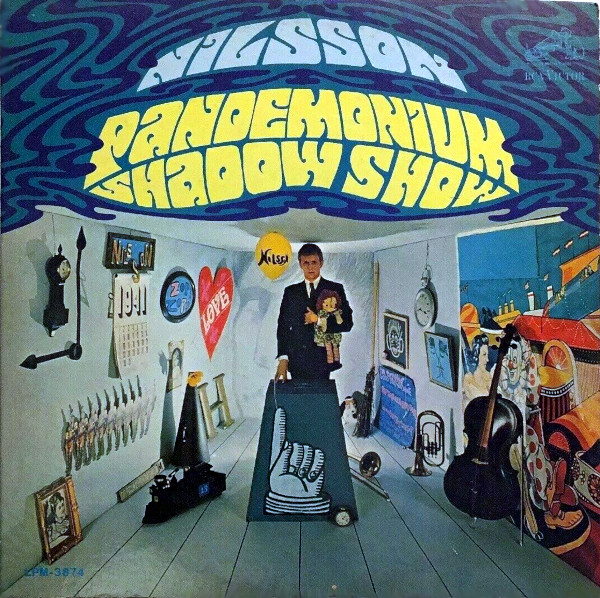 Nilsson’s major-label debut attracted a wider spotlight, but the real show was just getting started.

Kronomyth 2.0: Something warped this way comes

Step right up… to Nilsson’s second album, Pandemonium Shadow Show. Produced by Rick Jarrard, this really doesn’t have a blessed thing to do with Surrealistic Pillow. It sits at the other end of the pop spectrum, more Neil Diamond than Lucy in the sky with, featuring clever originals and professionally arranged covers tinted by Harry Nilsson’s dark humor and golden, protean pipes. It wasn’t the breakthrough album that RCA Victor seems to have anticipated, but it did catch the attention (and earn the praise) of John Lennon and Paul McCartney, which is no small feat.

The knock on Nilsson over the years has been, as good as he is, that he could have been better if he didn’t screw around so much. “1941” and “Cuddly Toy,” for example, are remarkably clever songs; dark, yes, but gilded with the kind of pop smarts that one rarely encountered outside of The Beatles. “Ten Little Indians,” which paraphrases the ten commandments (in case you missed the biblical reference to Shadrach, Meshach and Abednego in the intro) is also appreciably clever—and, again, dark. It’s as though Nilsson is under some kind of curse: birthed with a beautiful voice but doomed to see only the ugly side of things. Then again, I suppose there’s a whole genre of pop music that could be described as simultaneously sweet and sour.

Nilsson’s next, Aerial Ballet, contains what I would consider some of his very best songs. Pandemonium Shadow Show has a few good songs to recommend it, and “1941” would have to be counted among Nilsson’s essentials if only for its personal significance. A good half of this album, however, is Harry singing other peoples’ songs: “You Can’t Do That” (a pastiche of Beatles lyrics), Jesse Lee Kincaid’s “She Sang Hymns Out of Tune” and Ike and Tina Turner’s “River Deep Mountain High.” Even “Freckles,” a song written almost fifty years earlier from the Ragtime era, isn’t altered much in Nilsson’s Shadow.

I haven’t yet discovered any earthly use for the music of Neil Diamond. I understand that he’s very talented, blah blah blah, but none of those thoughts quell the overwhelming desire to want to punch someone when a song like “I Am… I Said” is playing. I sort of get that way when “Everybody’s Talkin’” is playing too. I don’t get punchy during Pandemonium Shadow Show, yet I wish it had a few more original hits or less heavy-handed arrangements. At some point, you’ll want to check out the Show because Nilsson is just so damn interesting and talented, and this isn’t some pretentious piece of outdated pop like Cat Stevens’ New Masters. Instead, it’s an intriguing introduction to a unique talent who was about to prove that all unique is love.