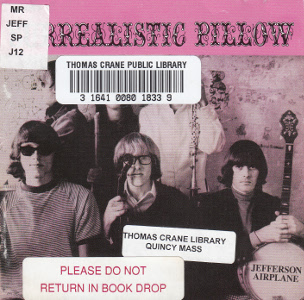 You’re standing at the gilded gateway to the psychedelic revolution, the twin spires of “Somebody To Love” and “White Rabbit” beckoning you with open mind. The Airplane’s second trip stands as the first truly great achievement in the cultural exodus to San Francisco. You could call it a groundbreaking record, but it’s more of a sky-opening one: the potentialities of popular music were significantly expanded with Surrealistic Pillow. Much of its genius stems from the different personalities within the band, all of whom brought something unique into the mix (including departed drummer, Skip Spence). There are the fragile, unreal ballads from Balin (“Today,” “Comin’ Back To Me”), the ambitious adventures of Paul Kantner (“D.C.B.A.—25”), the combustible rockers (“3/5 of a Mile in 10 Seconds”) and even an acoustic oasis (Jorma’s “Embryonic Journey,” which served as a sort of template for countless guitar interludes from “Embryo” to “The Clap”). Truly, the bands that came before appeared as men on a chessboard, moving in predictable fashion. Surrealistic Pillow’s charm is its unpredictability; you simply don’t know what’s coming next. The same could be said for the Airplane itself, which was flying straight into heavy turbulence, but here it’s all part of a fantastic journey. In 2003, the album was remastered and expanded with six bonus tracks, including a second Skip Spence song (“J.P.P. McStep B. Blues”) and Kantner’s “Go To Her,” both of which had turned up earlier on the catchall compilation, Early Flight.