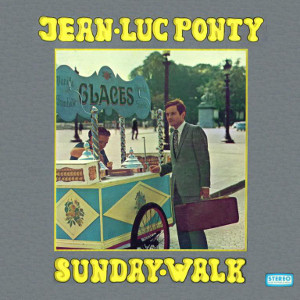 The novelty of a jazz quartet led by a violinist notwithstanding, this is standard bop played by a competent group of Europeans.

Kronomyth 2.0: NO WALK IN THE PARK. This is the pre-prog, unplugged Ponty, which may or may not be your cup of pomegranate tea. I bought a used copy of this years ago, loaned it to someone, never got it back and never really cared. I’ve always felt it was a mixed success, maybe because the idea of a jazz violin seemed revolutionary at the time and yet the bebop arrangements of Sunday Walk were anything but. I guess it’s a new wine in an old wineskin kind of a thing, he wrote, further confounding readers with one of the more obscure parables. In a year or two, this music would be trumped by King Kong anyway. The album has been released many times over the years (I would take the discographical data below with a few grains of salt), often credited to The Jean-Luc Ponty Quartet, which has more to do with loose licensing than popular demand. The supporting players are solid, if a little academic in their approach; jazz always seemed like some pickled curio in the mouth of Europe, but that may be my personal bias. I suppose I could point out individual tracks in the interest of providing some value today, although I honestly don’t have any “favorites” on here. The closing “Suite For Claudia” is at least pretty, and the opening “Sunday Walk” is exciting. (There, I can check off an imaginary checkbox that says “discussed individual songs” next to it.) If I seem uninspired today, Ponty’s probably not to blame. I’m not a big fan of bop; it all sounds the same to me, and the existence of vexing offspring (hardbop, postbop) makes me feel like I’m on the outside of something important looking in. The music on Sunday Walk probably sounded fresh in 1967, but the moment you say something is “fresh,” it isn’t. (Oddly, this rule also seems to apply to packaged salads and most of your vegetables except for potatoes and the hard squashes.)