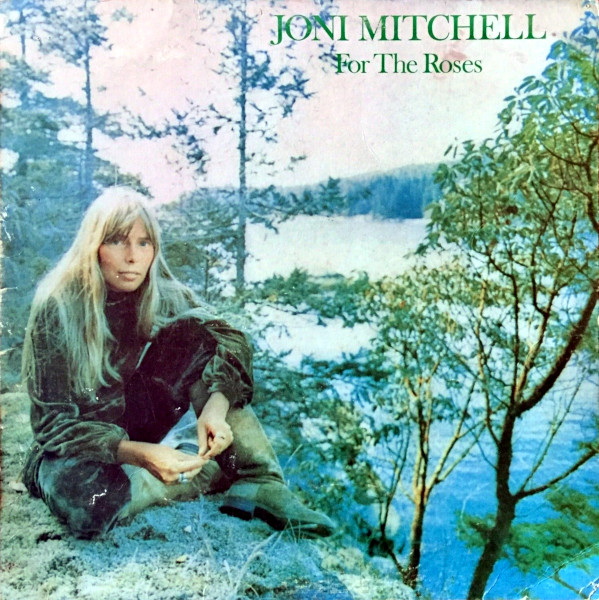 A naturally brilliant but audibly deflated work that brings Joni’s jazzier sensibilities to the fore at the expense of a little joy.

After Blue, well, anything was bound to be a bit of a letdown, no? For The Roses is a bit of a letdown. It’s both a step back in its dry arrangements and a step forward in the jazzy and elusive melodies sweetened (ever so slightly) by the appearance of woodwinds and horns. There are a handful of excellent songs on here (“See You Sometime,” “Cold Blue Steel and Sweet Fire,” “Electricity,” “You Turn Me On, I’m A Radio”), but you’ll find armfuls of the stuff on the albums before and after.

Gone is the dulcimer, which warrants a moment of silence in memoriam. (Waits one moment while looking nervously at the wall.) Joni returns to the acoustic piano and acoustic guitar, with the caveat that Joni’s piano pieces seem unnecessarily difficult this time around. The opening “Banquet,” for example, reminds me why I don’t listen to a lot of Tori Amos. “Cold Blue Steel and Sweet Fire” introduces the new wrinkle in the arrangements: woodwinds (courtesy of Tom Scott). They drift in and out on For The Roses, like house guests walking into a late-night kitchen conversation looking for something sweet, entering and leaving without a word.

While Joni the Arranger scores points for the jazzy twists and turns on tunes like “Barangrill” and “Let The Wind Carry Me,” Joni the Singer is less impressive on Roses. On Blue, she was transcendent. You’ll warm up to her on the second side with “Electricity,” “You Turn Me On, I’m A Radio,” “Blonde in the Bleachers” and “Woman of Heart and Mind,” but nothing reaches the aching yearning of “California” or “A Case of You.” Of course, it would be unfair to compare most albums to Blue; Roses, unfortunately, requires it.

Now, had Blue never existed, Roses might be seen as the next logical step between Canyon and Court. It feigns toward the full-time accompaniment of Court and adds stronger elements of jazz, yet the wounded poetess at the piano remains. Blue, however, soared where Roses hovers like a ghost much of the time. It’s still the work of the same musical genius, only the freedom and discovery of her last album seem to be replaced by the licking of old wounds and the lacking of new lovers. You’ll want to hear this at some point, but I put Blue, Court and Canyon on a higher pedestal.

All songs composed by Joni Mitchell.