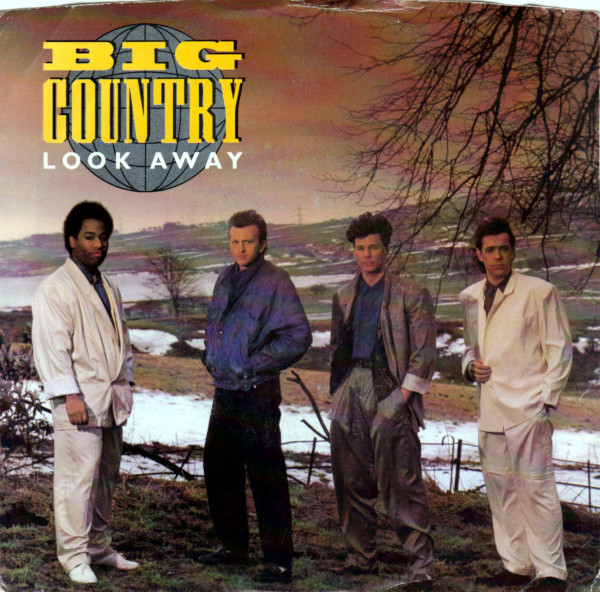 Another epic single with an equally epic video that somehow didn’t score big in this country but did well in the UK.

Look, I have to level with you: most Big Country songs tend to sound the same to me. But look away from the omnipresent e-bow effects and you’ll hear a consistent greatness at work that few of their contemporaries could match. U2 usually comes to mind, Echo & The Bunnymen after. Maybe there’s not a great deal that separates a “Look Away” or “Restless Natives” from their previous body of work, but that both are great songs is clear after a couple of listens.

“Look Away” is another anthem for doomed romantics, with Bruce Watson and Tony Butler doing their darnedest to mix things up through their superlative musicianship. Maybe they sensed that same sameness and took matters into their own hands, I don’t know. It was accompanied by a beautifully filmed music video that should have made MTV’s top 100 music videos of 1986 (yes, there is such a list). The video’s theme seems to borrow from Ambrose Bierce’s “An Occurrence at Owl Creek Bridge,” as a man ready to be executed escapes at the final moment. Or does he? No, he doesn’t, he winds up in the same crappy situation he started in, the dupe of his own fantasy, in a literary device I like to call “every damn morning of my life.”

The non-album flip side, “Restless Natives,” is no mere afterthought, but part of the band’s stirring contribution to the film of the same name. It begins with a bit of movie dialogue, then launches into another anthemic wonder. I really need to come up with a synonym for anthemic. Sweeping? Grandiose? Flaggy? As B sides go, this is a treasure; in fact, when the labels decided to compile Big Country’s B sides and rarities, they called it Restless Natives. I would have called it The Flaggy B-Boys’ Golden Bottoms, but we’ve already established how bad I am at naming things (ahem, Progrography).

Note: The 12-inch single featured a remix of “Look Away” that is pretty weird. Not good, just weird. Most extended remixes are just a bad idea. Actually, most ideas from the 1980s were a bad idea. The 12-inch B side features the “long” version of “Restless Natives,” which is a broader swatch (and, thus, not a swatch at all) of the movie’s soundtrack music and dialogue.