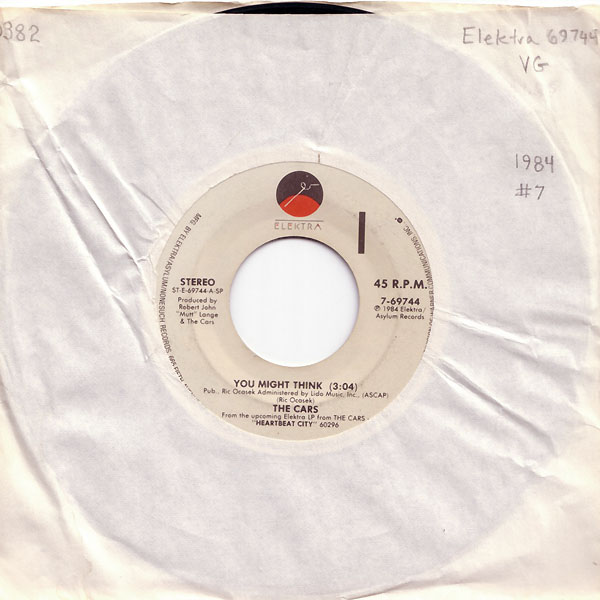 Turbocharged by top-of-the-line audio and video production, The Cars enter their mass-production phase.

The Cars traded in their cool minimalism for crushing choruses and over-the-top production on Heartbeat City. It is a small kindness, I suppose, that Marc Bolan and Mutt Lange never worked together. (Shudders at the thought.) This, the opening salvo from The Cars’ new album, is perhaps better remembered today for its then-groundbreaking music video, which featured some of the earliest computer animation. It would go on to win MTV’s first music video of the year award and, from this point forward, The Cars were an audio/visual group.

The thing is, “You Might Think” isn’t a bad song. With fewer layers and a herky-jerky delivery, it might have been another minor hit from the band. But Lange fussed over every detail and filtered every sound until the song’s simple chord changes pummel you; instead of tension/release, it’s a sensory overload. In the UK, the downbeat “Why Can’t I Have You” was selected as the first single; both featured “Heartbeat City” on the B side. When the UK later released “You Might Think” as a single, “I Refuse” was the flip choice. Both songs suggest Beatitude with better production.

For the record, I do believe that Mutt Lange is a genius, just more in the evil genius camp. In fact, one of the things I admire about AC/DC is that their music had a stronger personality than Lange’s production; Foreigner and The Cars weren’t so fortunate. And while I’m counting my good fortunes, I’d like to thank our benevolent God that Lange didn’t inundate the market with remixes of this material, since a six-minute version of “You Might Think” would be a mite much, methinks.

Original 7-inch single verison (UK)
A1. You Might Think (Ric Ocasek)
B1. I Refuse (Ric Ocasek)