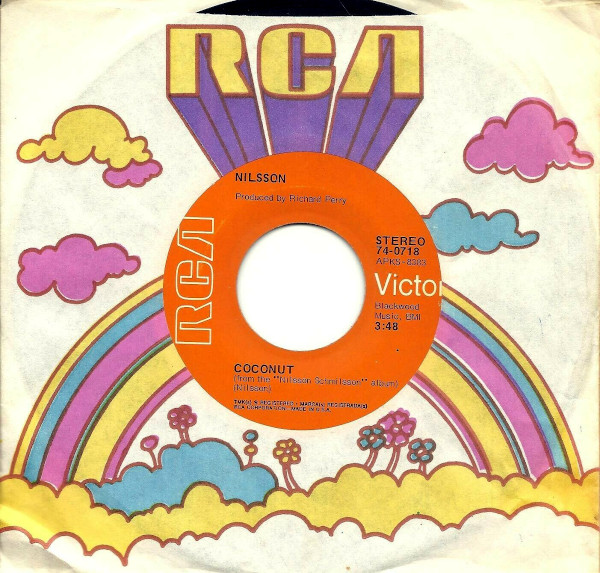 The song that inspired the Coca-Cola Company to put lime in Coke, those nuts.

You know you’ve written a classic when The Muppets cover it. For some reason, this song always seems to carry a jungle theme with it. I’m guessing that’s because coconuts are a tropical fruit and Nilsson uses a vaguely Jamaican accent for the line “you put de lime in da coconut.” In 2005, the Coca-Cola Company briefly released a version of Coke with Lime and used this song in its advertising campaign, changing the lyrics slightly to “you put the lime in the coke, you nut.” I’m not sure who collected the royalties on that (Nilsson passed away in 1994), but I hope they used all the money to buy Coke with Lime.

The B side is another album track from last year’s Nilsson Schmilsson, Down. (The UK version featured The Moonbeam Song, which makes it even more bewildering that it didn’t chart.) With a great horn section and a rock-and-roll sound, “Down” feels like a lost John Lennon track, and could have been slipped onto Walls and Bridges without anyone being the wiser (if slightly happier). Oddly, “Coconut” would have felt more at home on a Paul McCartney album. Maybe that’s why Nilsson was one of the few things The Beatles seemed to be able to agree upon.