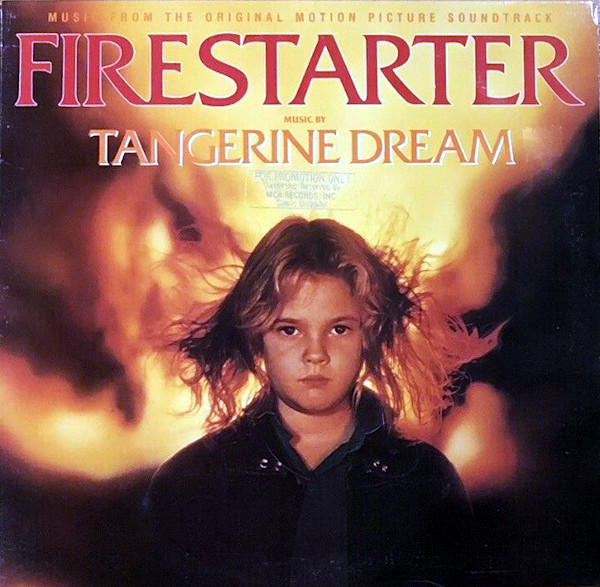 This soundtrack is an alternately melodic and moody companion to the Stephen King adaptation.

You could argue that Tangerine Dream hit their stride as film composers with their soundtrack to Firestarter. I don’t know why you’d want to argue that point, or who you’d be arguing with (no doubt another techno-nerd). After the success of Risky Business, however, a Tangerine Dream score was almost a bankable asset, much like Vangelis after Chariots of Fire.

That said, I have yet to hear a Tangerine Dream soundtrack that can hold a chakra candle to their proper albums. If you’re wondering whether you should buy Firestarter or Exit or White Eagle, wonder no more. Buy Exit. Buy White Eagle. Buy a Kitaro album, for crying out loud. Soundtracks are meant for those people who really loved the movie, which in this case was more than a few people. (More than Wavelength, anyway.) And for people who prefer to dip their toes into electronic meditation rather than go cave spelunkering with Klaus Schulze. I imagine these are the same sort of people who turn the lights off in their room and listen to Genesis’ “Second Home by the Sea” on headphones.

Speaking of Genesis, the first half of Firestarter isn’t far removed from the instrumental works of Tony Banks. Crystal Voice and Charly the Kid could even pass for instrumental outtakes from Invisible Touch. By album’s end, it all becomes a bit rote as Christopher Franke delivers a basic rhythm for Edgar Froese and Johannes Schmoelling to hang their ideas on, but the results are rarely less than moderately engaging; sort of a Tangerine Dream lite.

My initial impression of Firestarter was this: melodic and better than most Tangerine Dream soundtracks. That enthusiasm faded on the second half, as Franke seemed to just be dialing it in with one-note beats, but I still enjoyed this more than Wavelength and maybe even Thief.

All songs composed by Tangerine Dream.