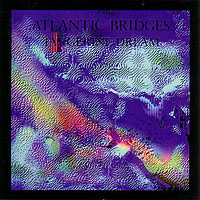 Not a compilate waste of time, but do you really need a dozen recent Dreams divorced from their original concepts? The band’s label, TDI, released Walls and Bridges in 1999, featuring selections from Lily on the Beach, Melrose, Turn of the Tides, Tyranny of Beauty, etc. Fine in a non-election year when nobody’s running, but TDI also trumped out film compilations, live albums and original releases to the tune of ten or more in 1999 alone. In such crowded company, Atlantic Bridges naturally gets pushed to the back of the room, Mars Polaris to the front. So bad timing costs them one imaginary star, a second falls for failing to correctly label this as a compilation on the outside of the container. They’re not remixes so far as I can tell (the recording levels are louder than the originals, which initially threw me). It’s possible TDI tweaked the recordings slightly in order to sidestep licensing issues, just as possible they bought the licensing fair and square and were interested in making their money back. Either way, Atlantic Bridges is superfluous product, a bridge to the recent past where a perfectly paved road already exists. And if you’re thinking this is a good way to get your feet wet in their recent work, keep your socks on. You’ll get more out of hearing Turn of the Tides or Optical Race in their entirety than sampled here. In my mind, releases like Atlantic Bridges represent the double-edged sword of CD technology; the cheaper the effort, the cheaper the sentiment. With MP3 technology, compilations like this should go the way of the 8-track as listeners build their own bridges to the past.

The Players
Produced and edited by Jerome Froese.

The Pictures
Cover artwork and design by Edgar Froese.