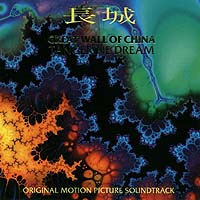 There’s no stepping around it: the words “original motion picture soundtrack” warn of another tepid TD album. No band to my memory has released more of them and, combined with remixes and repackages, they have poisoned the band’s discography. Conventional criticism, which states that Tangerine Dream faded in the ‘80s and ‘90s, reflects the uneven nature of their complete recorded output for those decades; strip away everything but the original studio albums and that argument loses its potency. Because their numbers are legion, even TD’s soundtracks fall into different categories: the recycled pieces for commercial films (Thief, Risky Business, etc.) and joint audio/video productions that give the band the freedom to write new music around visual themes (Oasis, Canyon Dreams). Great Wall of China inhabits the latter, created to accompany a video journey of this architectural wonder. The disc gets off to a great start with “Meng Tian,” the kind of 21st century club music you’d expect to hear on a Samurai Jack cartoon. The music that follows is less stimulating, more humid, in many ways an Eastern spin on the soundtrack for Oasis. Edgar and Jerome Froese together have no trouble filling up space with sounds, pacing their pieces with soothing melodies, including interesting twists on occasion (see/hear “Cradle of Prodigies”), and generally creating music on a modestly heroic scale. Few of the tracks stand out from the whole, instead building a continuous link from beginning to end that suits the subject matter. While Great Wall of China is less interesting than a legitimate new work like Goblins’ Club, this isn’t merely a case of coasting for the Froeses. Classical music (and by extension, electronic music) has a long tradition of supporting the visual arts, from elaborate church services to ballets to film. And there has always been a visual component to TD’s music, from the telescopic works of the ‘70s to the environmental efforts of the ‘80s and ‘90s. Approaching this soundtrack as slices of the same cake will temper expectations accordingly. It’s not as interesting as a new album proper (and I haven’t heard the TD soundtrack that was), but Great Wall of China is a nice escape from the rigors of a Goblins’ Club or Turn of the Tides, a chance to stare over the shoulders of these musical painters and survey both the finished canvas and the landscape that inspired it.

Composed by Edgar and Jerome Froese.