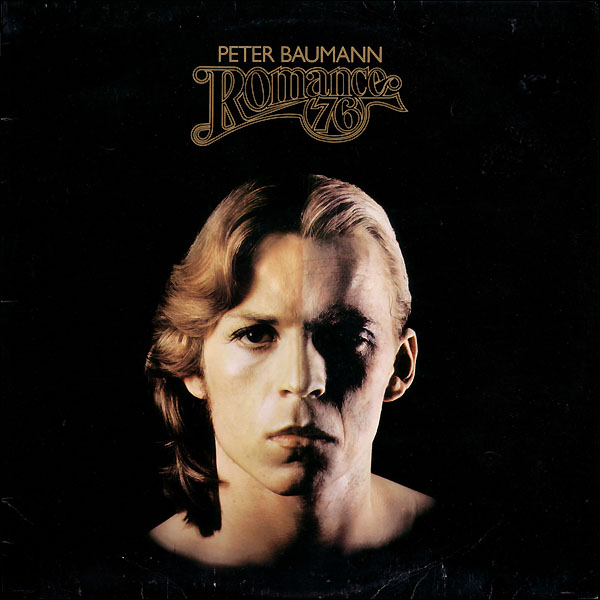 A solid electronic debut with classical overtones from the junior (in tenure) member of Tangerine Dream.

As part of the Tangerine machine, it was never that clear to me what Peter Baumann brought to the band in terms of an individual artist. Outside of one song credited to him (“Sequent C’” from Phaedra), there wasn’t any place I could point to in the music of Tangerine Dream and say “Aha! That’s Peter Baumann’s influence in the band.” Maybe that’s a musical deficiency in me, or a rare show of restraint where blurting out musical facts is concerned.

As the first solo album from Baumann, Romance ’76 is a unique window into what makes the young musician tick as an artist. The album is effectively split into two halves: melodic electronics (side one) and moody, quasi-classical music (side two). There are moments when the music recalls Tangerine Dream, sure, but I was equally reminded of Cluster, Kraftwerk and Klaus Schulze. In other words, if you came into this expecting to hear Tangerine Dream lite, it’s more than that. I wouldn’t call it a stunning declaration of independence (I probably have in the past, since my enthusiasm for this album seems to wax and wane depending upon my mood, and I’ve never met a pun I could resist), but this is a well-crafted record that utilizes electronic sounds in a surprisingly melodic, direct and enjoyable way.

The opening Bicentennial Present introduces Baumann’s (seeming) affection for simple, heroic melodies and streamlined arrangements. In some ways, it anticipates the Tangerine Dream to come, whose music grew increasingly more direct and melodic with time. Romance sounds much more like Cluster than Tangerine Dream, with a toy-like approach that immediately recalled (to my mind) his production work on Cluster’s Grosses Wasser (one of the first electronic albums I owned as a youth). Phase By Phase meanders a bit in the middle, but otherwise does a nice job of showing off Baumann’s darker side while making good use of electronic beeps and blips.

Baumann unveils his more serious, classical side on the second half of the album. Meadow of Infinity Part I introduces simple cellos and voices that create a Carmina Burana effect, ultimately ending in a frenzy of tribal drums. The Glass Bridge utilizes cellos, violins and bass guitar to create modern classical music. Meadow of Infinity Part II merges synthesizers, classical instruments and some clever headphone mixing for a trippy, classy ending to the album.

As I said, I tend to run hot and cold on this album. Sometimes (like today), I’m completely impressed with Bauman’s directness, economy and efficacy. On other days, usually after I’ve listened to one of Tangerine Dream’s early meisterwerks (or, at the other end of the spectrum, Baumann’s Repeat Repeat), I find Romance ’76 a bit too accessible and wish for something meatier. In either mood, however, Romance ’76 remains pleasantly complementary to the work of Tangerine Dream. There is, after all, no lack of original Tangerine Dream albums to choose from, and if Baumann had simply sought to make the same kind of music, it would have been just another TD record and, perhaps, not an exceptional one. Instead, Romance ’76 is a very good Peter Baumann album; probably the best he’s ever made. It may not mark the beginning of a lifelong love affair with Peter Baumann’s music, but as a dalliance you won’t do much better.

All tracks written by Peter Baumann.

Peter Baumann (instruments, mixing) with H. Baumann (conductor on B1), members of The Philharmonic Orchestra Munich (B1). Produced by Peter Baumann; mixed by Ottmar Bergler.

Cover by Cooke-Key Associates London. Make up by Mary Hillman.