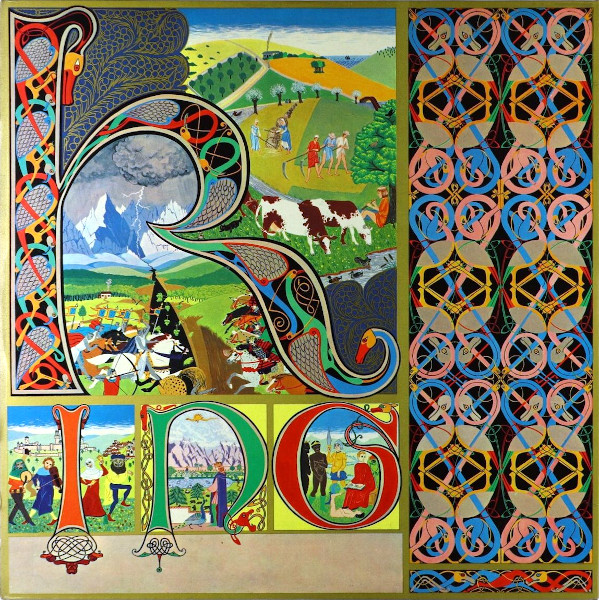 Ornate, ornery and orfully good, Crimson’s third is a diabolical cirkus of the senses.

I had something here before about dark towers and deep libraries, which sounds about right, since that’s where Lizard takes me. What I failed to mention is how brilliant this is. Standoffish, yes, noisier and more complicated than it needs to be, which I find by turns fascinating and forbidding. Today it’s the former, and even the little black imp is dancing on the bookcase, limbs akimbo.

So much music gets swirled into the mix—horns and piano and mellotron and tripping snare rolls—that musical indigestion is a distinct possibility. The devastating force of earlier albums remains, but it competes with dissonant jazzy nonsense some of the time. (At the moment, I’m lost in the mid-song maze of Happy Family and there doesn’t seem to be any way out of it.) If you seek the respite of “Cadence and Cascade,” there is Lady of the Dancing Water, featuring the lovely flute work of Mel Collins. It’s not quite the sublime creature of Cadence; oddly, it’s another guest (Jon Anderson) who changes the tone of the record this time.

As much as Lizard wants to assume its own landscape, the arrangements are too self-conscious to fully transport me sometimes. I suppose that’s where the tower and the library come into play. It’s a beautiful world glimpsed from a distance, Robert Fripp intruding into the picture with black and sour commentary to yank the listener out of their immersion in Lizard’s warm protection. Interesting though the Anderson cameo is, it’s not the sympathetic setting he’d find on The Yes Album, instead siding more with the overwrought Time and a Word. Better by far is Gordon Haskell on Cirkus, though tampering with his voice on Indoor Games and “Happy Family” lessens the stakes of his dulcet throat. Joining them (and expanding King Crimson’s musical dialogue considerably) are pianist Keith Tippet, drummer Andy McCulloch and a trio of horn players. It’s arguably one of Crimson’s most accomplished lineups, revealed by the fact that Islands was found lacking with the departure of McCulloch and Haskell.

All songs written by Robert Fripp and Peter Sinfield.

Outside painting by Gini Barris. Sleeve conception by Peter Sinfield. Inside marbling by Koraz Wallpapers. Typography by C.C.S.