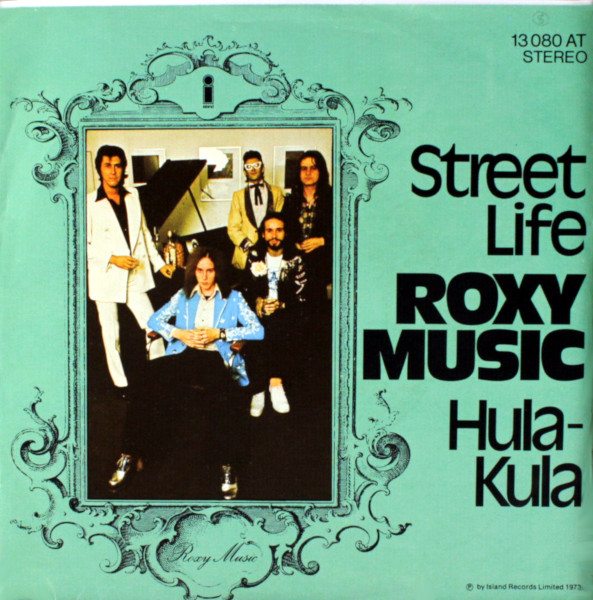 The single from Roxy’s third was another shot of art-rock adrenalin that took Pyjamarama’s pyrexic pillowtalk to the streets.

Kronomyth 3.1: You know my name (luau the numberer).

The title track to Roxy’s third by proxy, Street Life is a fitting heir to such mad flings as “Virginia Plain,” “Do The Strand,” “Editions of You” and “Pyjamarama.” It has just about everything you could want in a Roxy Music song. It starts with spectral electronics, ends with Bryan Ferry’s fingerclicks, and in between manages to squeeze a lifetime of joy into three minutes. You could argue that Roxy Music has simply been refining the same formula over and over, but you’d be arguing with yourself. There simply aren’t enough Pyramaramas and Street Lifes in the world to go ‘round.

“I wanted it to be a high-energy, fun song–buzzy and vibrant–and I hope the words convey some of that joie de vivre. Each verse seems to have its own character, like blocks on a street. And connoisseurs might notice the number of allusions to various brands of chocolate [Milky Way, After Eight, Black Magic], which is rather puzzling, since I never touched the stuff.” — Bryan Ferry, as quoted in an Uncut article.

While the A side is identical to the album track from Stranded, the flip side is a nonalbum track produced with their engineer, John Punter, that sounds like a Hawaiian song on helium. (In fact, that’s probably exactly how Phil Manzanera pitched it to the band.) Hula-Kula may be the silliest song that Roxy has recorded, featuring Manzanera’s treated guitar (which now sounds like a drunk ukelele), some playful mumbling from Ferry and what for the life of me sounds like several kazoos. Totally unexpected, and one of those treasured keepsakes in the secret society of Roxy, like “You Know My Name” only less well known.