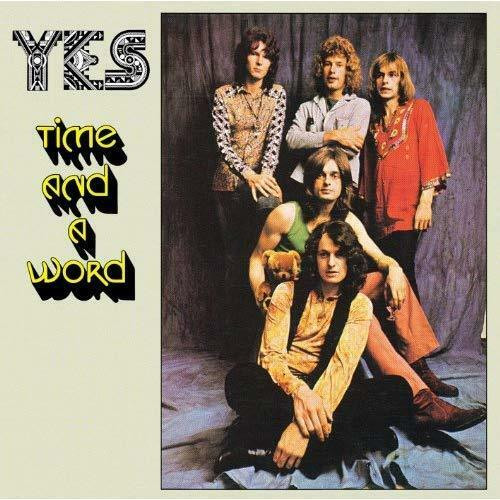 The heavily orchestrated second album topples over like an ambitious cake, underbaked in spots, overfrosted in others.

I’ve been writing from a parched pen for the past few days, relegated to wandering over familiar haunts in the search for some lost elixir of inspiration that might have been missed in earlier travels. Time And A Word seemed a fitting destination, since clearly it couldn’t have warranted such misplaced invective as “grandiloquent goo” (my original assessment). But a benediction from me will have to wait for a better day.

I’ve heard some of these songs in the context of Yesterdays and suffered no ill mood, but listening to the 1994 Atlantic remaster once more has rekindled my cranky disposition. Nowhere in their catalog is their celestial messenger so rudely handled as here, suffering the ignominy of string arrangements and caricatured in a cacophonous mix that buries the band under Chris Squire’s overburdened bass lines. Songs that might have soared of their own majesty (“Time And A Word,” “Then”) are here hijacked and harnessed to the body of a grossly gilded butterfly in the form of Tony Cox’ orchestration. The poor thing, as you might imagine, struggles to fly, flapping its wings noisily in a great commotion.

The tragedy here is that Time And A Word might have been a better album than this. “Sweet Dreams” and “Astral Traveller” indicate that the band’s “Survival” skills remain intact, but producer Tony Colton apparently had some sort of commercial death wish for them. The original red rating (a reference to the old Progrography) should of course be taken in context. Yes fans are a resilient lot, capable of subsisting on the nectar of a cactus flower where occasion calls for it. Still, I’d be remiss in not attaching to Time And A Word a word of caution. There’s little to be gained in listening to this album, chalking it up to the band’s inexperienced handlers, and slipping the disc back into the forgotten files, but much to be gained from exploring parallel universes like Flash or the solo work of Jon Anderson. Look at this as an open invitation to expand your world. No doubt you can squeeze something sweet from this lemon, but better to embrace sweet mystery, leave Time And A Word to nameless possibilities, and venture into someplace unexpected, perhaps even into the gardens of Gentle Giant or the harsh universe of Van Der Graaf Generator.