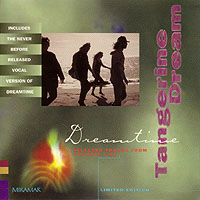 A sampler featuring abbreviated bursts from 220 Volt Live plus a vocal version of “Dreamtime” that should have been an international hit. Granted, I love the sound of Jayney Klimek’s voice (she reminds me of Natalie Merchant), who seemed the better part of Bankstatement to me. The rest of this limited edition disc pulls together some of Volt’s highlights, none more breathtaking that Zlatko Perica’s fearless performance on Jimi Hendrix’ “Purple Haze.” Blistering guitar solos, beautiful vocals, not the sort of thing you’d expect from Tangerine Dream. Yet it’s to the band’s undying credit that they continue to evolve, finding new challenges where other bands might have embraced staid formula. Perica and saxist/keyboardist Linda Spa would slip in and out of the Dream for a while, external forces acting on the internal dialogue of Edgar and Jerome Froese. Unfortunately, I don’t think the vocal version of Dreamtime has appeared anywhere else (possibly Electronic Orgy), so there’s no getting around owning this. As a kindness, maybe someone at TDI could add this to the band’s next compilation, bitte?

The Plastic
Released on limited edition CDEP in November 1993 in the US (Miramar, MPCD 2805).