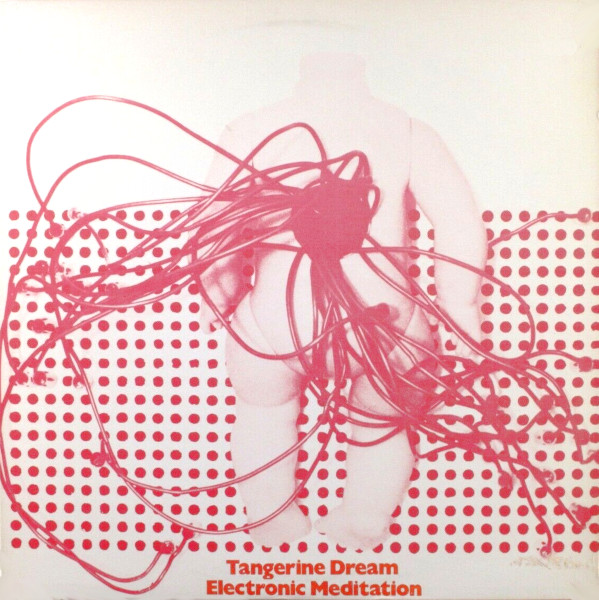 The quark-gluon plasma of electronic music, representing a soupy state of quasi-classical music and experimental science.

Scientists believe that, between the big bang and the creation of the worlds, matter existed in a soup-like plasma state. Electronic Meditation is its musical equivalent: a primordial soup of sound that would coalesce over time into Zeit, Atem, Phaedra. Taking their cue from the early noise collages of Pink Floyd, Tangerine Dream filters them through the classical structure (or non-structure, depending on how you see these things) of musique concrete to create a post-modern tone poem. The individual sections of Electronic Meditation morph together into one long piece featuring the same musical (?) elements including groaning cellos, electric guitars (plucked, scratched and sometimes played), organs, crashing drums, flutes and even broken glass.

In some ways, hearing this album is like discovering that the beacon of oddness from “Instellar Overdrive” is actually a star with its own solar system. There will be a tendency on the part of listeners at first to mistake Electronic Meditation as an experiment of accidents. It is, rather, chaos by design. The bass/cello, keyboards, guitars and drums are engaged in an alien dialogue from a shared manuscript. When order and calm emerge from chaos, as they do briefly during “Journey Through A Burning Brain” and “Ashes To Ashes,” a method to their madness also emerges. As a word of caution to later TD listeners, the album title is very misleading; there are no synthesizers or electronic instruments featured on the recording, and the music is anything but meditative. Instead, Tangerine Dream has recorded an orgy of sounds in a daunting and frightening musical opus.