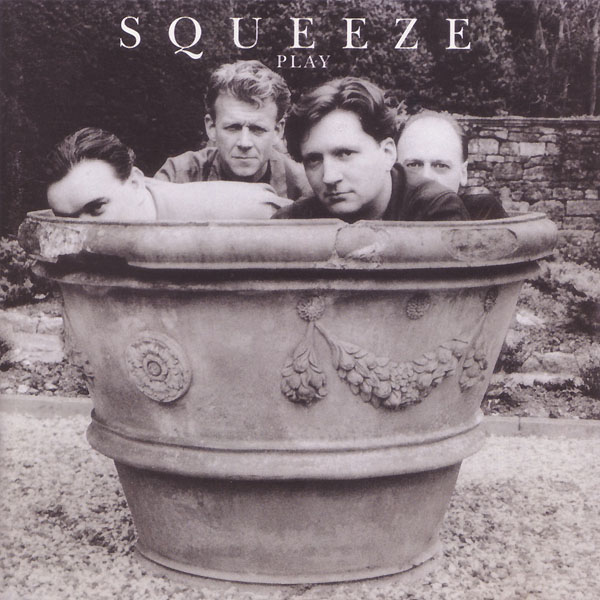 With each album lately better than their last, Squeeze had found a second wind.

Kronomyth 12.0: Between rock and a hard play.

Another play on words, another swell record. I heard this for the first time in my brother’s car; he had just bought the cassette and wondered what I thought of the new Squeeze album. My reaction, then as now, was to proclaim it the best thing they’d done since East Side Story. Amazingly, Trouser Press called this album “listless.” (For the unfamiliar, TP is normally a critical archer of deadly acuity, its pages a lovingly tended paunch of pithy prose, compared to which Progrography is a crab scuttling on the ocean floor with penn in claw.)

I’ll concede there are some hurdles standing before Play, though none of them insurmountable without a little effort: (1) Tony Berg’s post-Michael Penn production lacks the pub rock spontaneity of classic Squeeze—so does everything from Sweets onward; (2) Choosing “Sunday Street” as the advance single turned out to be a dead end; (3) the lyric sheet extends the “Play” pun past its logical conclusion by incorporating the lyrics into a play that makes little sense. Even years later, I still haven’t made my way through the whole lyric sleeve. (I’m saving this and Psychoderelict’s scrabble for a very, very rainy day.) As I mentioned, all small hurdles, beyond which lie some treasured keepsakes: “Wicked And Cruel,” “Walk A Straight Line,” “House of Love,” “Cupid’s Toy,” “Satisfied,” “The Day I Get Home.”

Song for song, this usually gets the nod over Some Fantastic Place, and both end up on the platter more often than Babylon or Frank. I don’t see the added production value as stifling (which it was on Cosi Fan Tutti Frutti) but rather masterful, and the songcraft of Difford & Tilbrook deserves this sort of sumptuous setting. Listen to the gilded arrangements of “Gone To The Dogs” or “There Is A Voice” and you hear this music being lifted to its logical height, not handed in all wrinkled and dirty from misadventure like “Slaughtered, Gutted and Heartbroken.” If I were building a Squeeze collection, I’d start with East Side, Argybargy and an album of greatest hits to fill in the cracks, but after that it’s time for Play.

All songs written by Chris Difford and Glenn Tilbrook. Arranged by Squeeze and Tony Berg.