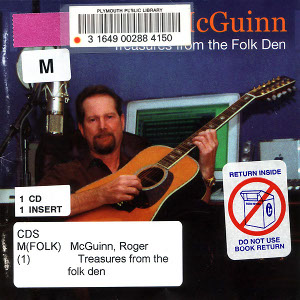 Honestly, I thought this was going to be a folk den waste of time. Instead, it awakened a hunger in me for folk music that I didn’t know I had. First, to backtrack for a bit, the origins of the Folk Den Project, which has consumed much of Roger McGuinn’s time in the 21st century. McGuinn began posting folk songs, one a month, on his web site, which led to a dual discovery wherein McGuinn delved deeper into our country’s musical heritage (folk) while simultaneously exploring our digital future (the Internet, MP3 technology and digital recording/editing tools). From these came the Folk Den projects (volumes one through four), which typically featured McGuinn multitracked in his home. This disc features McGuinn taking his exploration on the road, visiting the homes (temporary or otherwise) of artists such as Joan Baez, Judy Collins, Tommy Makem and Pete Seeger. Given the guests involved, Treasure From The Folk Den is a more professional affair than the previous Projects (as I understand it), though the folksy informality of the original sessions remains since, after all, these are still essentially homemade recordings. Now, that bit of history settled, onto the music. McGuinn’s voice has always had a “tart innocence” to it that you either enjoy or you don’t. To my ears, it sounds as good as ever, though I would argue it’s out of its element on the Irish songs (“Finnegan’s Wake,” “Whiskey in the Jar”). Paired with Baez and Collins, it’s a thing of beauty: “John Riley,” “Bonnie Ship The Diamond,” “Wagoner’s Lad.” It’s even more effective on its own: “Alabama Bound,” “Cane Blues.” Those tracks account for most of the treasure; I’d add “John The Revelator” and the instrumental “Reel” for good measure. The Tommy Makem tunes are also good, but the man has released an album or two of Irish music himself, and you’d best go searching there. The Folk Den series is clearly a labor of love for Roger McGuinn, and establishes him as an able ambassador of American Folk in the new century. I wouldn’t be scared off by the cover (or what you can see of it after the label-happy people at Plymouth Public Library got through with it); this is folk captured in its very essence: fleeting and timeless.