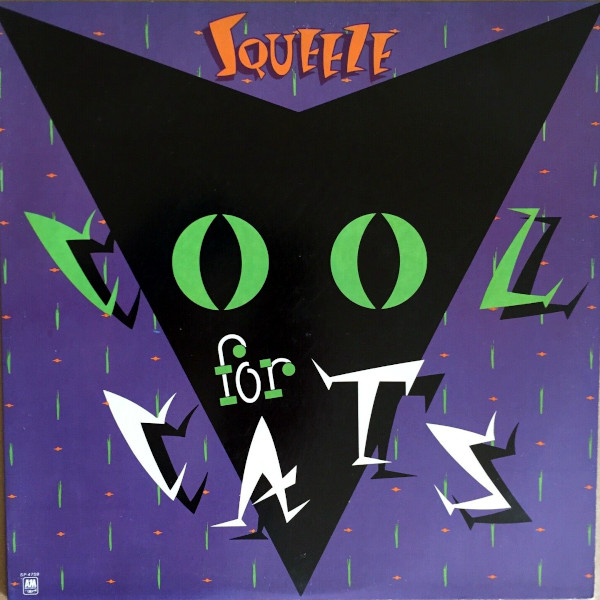 The pub-rock charm bubbles to the surface on the second album, and the hits started coming.

It’s hard to say what separates a good Squeeze album from a great one. Oh, wait, no it’s not. It’s the hits. The formula for the success of a Squeeze album is the inverse relationship between the number of perennially hummable songs and those that sound like they were scribbled in a notebook moments before. (Actually, some of their best songs have been dashed out quickly, but that’s another story.)

“Take Me, I’m Yours” was not a timeless hit. “Bang Bang” was plainly a miss too. But Up The Junction, Cool For Cats, Goodbye Girl and Slap & Tickle (well, the chorus anyway) are songs I’m still humming forty years later. The rest of the songs on Cool for Cats? Take them, they’re yours. It’s not like I don’t have Elvis Costello, Nick Lowe, Ian Dury and Graham Parker albums to listen to, after all.

Cool for Cats finds the band settling comfortably into the pub rock scene. Several of these songs even take place in a pub. Yet society was still trying to figure out where the line fell between punk, new wave and pub rock, so there are some awkward moments when Squeeze strikes a strange pose. (Case in point: the video to “Cool for Cats,” which I’m assuming cost all of fifty quid to make.) Granted, it looked a lot stranger the first time around with John Cale behind the boards, the man who put the “harmony” in “Nico’s soul-crushing harmonyum.” John Wood lets the boys be boys, and a lot more of their charming personality shines through as a result.

The opening “Slap & Tickle” was probably intended to replicate the success of “Take Me, I’m Yours.” Lots of synthesizers, shared vocals between Glenn Tilbrook and Chris Difford, a kind of edgy claustrophobia to it. It’s the chorus that saves it, a light moment in the dark musings of Difford’s oversexed imagination. The remaining songs on side one are a bit underdone, but have promise. Revue feels like an idea they already tried on the first album. Touching Me, Touching You is rock & roll nostalgia with some modern touches including (unfortunately) the synthesizer. Difford takes the lead on It’s Not Cricket and sounds a lot like Ian Dury. It’s So Dirty is redeemed by a short guitar solo from Tilbrook and, really, guitar and piano solos should be required for every Squeeze song. The Knack is failed film noir. (And now you’ll have “My Sharona” stuck in your head all day. Sorry about that.)

Side two is a vast improvement. It kicks off with one of Jools Holland’s Jerry Lee Lewis numbers, Hop Skip & Jump. Jools has a much better voice than Difford—a list that would also include Paul Carrack, Keith Wilkinson and a raccoon caught in an electric fence. “Up The Junction” is pure genius, a story of “boy meets girl, girl has baby, boy loses girl and baby” rendered with just the right amount of bewildered innocence by Tilbrook. Hard To Find is sung by Difford (see earlier raccoon comment) and has a nice chorus plus a little piano solo from Jools (pure salt, those). Slightly Drunk is a good try, indicating that Squeeze and Queen may have more in common than four letters. “Goodbye Girl,” here in its elpee version, is a brilliant idea with some wonderful singing that has too many synthesizers, but you can’t hold a great song down, and this low-key ballad about an encounter with a prostitute is a career keeper. The album closes with a sort of redemption for Difford, “Cool For Cats,” who totally nails the Dury-inspired vocals on this zany stream-of-consciousness series of vignettes.

That Difford and Tilbrook are a terrific songwriting team is evident on Cool for Cats. So is the fact that the band only has one true lead vocalist, although Holland provides a nice respite. Argybargy would cement their status as pop geniuses, and nothing on Cool for Cats is as ridiculously catchy as “Pulling Mussels From A Shell” or “Another Nail In My Heart,” but it’s definitely a hop, skip and jump in the right direction. That you can get all the essential bits of Cats on Singles, 45s and Under (including the superior single version of “Goodbye Girl”) renders this less of a compulsory purchase nowadays. Unless you want to make one of those album-cover clocks from it, which would look totally cool.

All songs written by Chris Difford and Glenn Tilbrook unless noted.