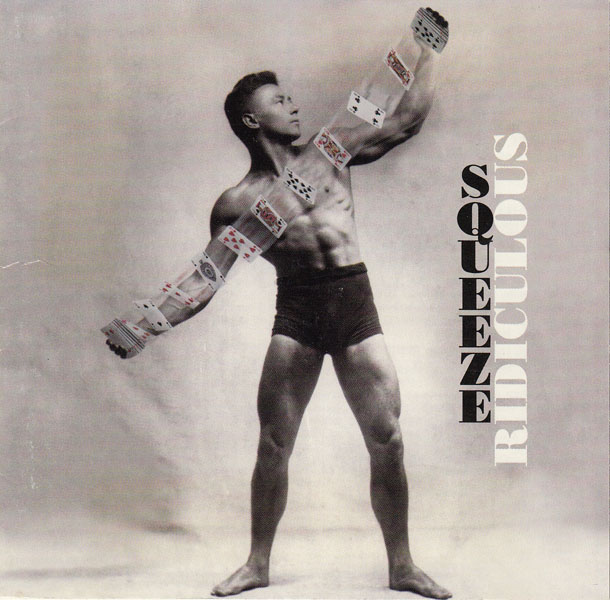 Another fantastic album that concedes nothing to England’s new generation of pop stars (Blur, Oasis, etc.).

Kronomyth 14.0: The fruit of another.

Death, taxes and the tunefulness of Squeeze are the incontrovertible realities of life as I know them. I have never met a Squeeze album that didn’t have at least three swell songs (their first notwithstanding), and lately the band has managed to squeeze four or more gems of various magnitude onto every disc (Play, Some Fantastic Place).

It occurred to me when listening to “Grouch of the Day” how Squeeze had arrived at a place in their artistry where they could set up and knock down a dozen or so smart pop songs with just enough prickliness to make them seem like loveable underdogs when, in fact, it’s the rest of the musical world that’s to be pitied for not having a half of their genius. Of course, that contingent known as “the rest of the musical world” could presumably string together at least one decent guitar solo, so they’re not to be pitied too much, but you get the idea.

Ridiculous does feel overproduced in spots (treacly choruses, treated guitars, etc.), but none of that matters when a song like “This Summer” or “Daphne” rolls around, and I can forgive a band that can rhyme “jury” with “Nana Mouskouri” a lot. The overproduction could be the result of a band that, for the first time in its history, had no proper keyboard player (Glenn Tilbrook is credited here) and found itself with its third drummer in as many albums. What I hear as consistency could also be perceived as repetition (by Squeeze haters, you vile vile people). “Walk Away” sounds a lot like “House of Love,” “I Want You” feels like a rewrite of “Heaven Knows.”

Lyrically, the album deals in several spots with a parent reflecting on his own relationship with his parents, relationships going sour and turning the corner, and a drunken lout story (“Great Escape”) that steps over the line. Not the sort of stuff that would normally make for a tuneful album, but Difford and Tilbrook are the original sweet and sour sauce where post-Beatles pop music is concerned. So should you shell out money for yet another Squeeze album? Don’t be ridiculous; of course you should.

All songs written by Chris Difford and Glenn Tilbrook unless noted. Arranged by Peter Smith and Squeeze.