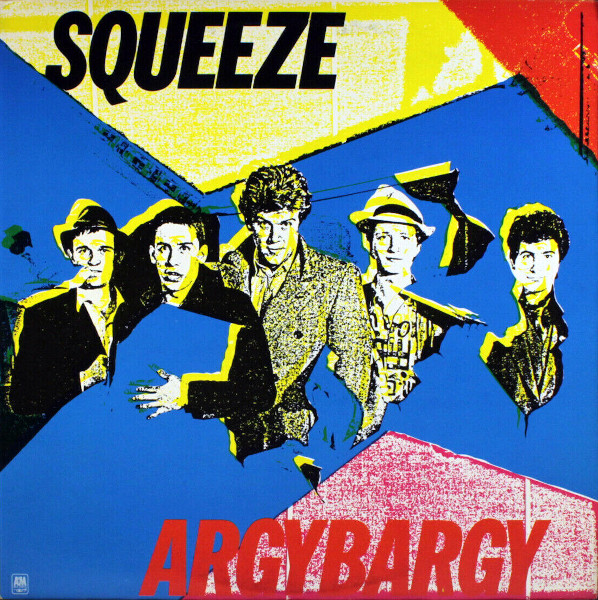 If you crossed The Beatles with Elvis Costello, you’d get this (and be happy).

Cool for Cats, in case you weren’t counting, produced four hits. Argybargy is even better. The opening two tracks are ridiculously catchy and, combined with clever wordplay, pushed my buttons like nothing since Elvis Costello’s Armed Forces. Over the course of the album, Squeeze returns to earth, though more gently than their last. (Their next album never did come down, but that’s a different Story.)

The jump in quality between this album and their last is startling, and you might have said the same between their first and second too. As good as “Up the Junction” and “Cool for Cats” were, I never saw Pulling Mussels (From the Shell) coming. It is simultaneously a highly creative and simply perfect song, the sort of thing that had people reaching back to The Beatles to find a precedent for it.

Glenn Tilbrook found his voice on this album, which meant Chris Difford’s gruff voice took a back seat and the sweetness rose to the surface. Even on the one track where Difford does share lead vocals, If I Didn’t Love You, Tilbrook’s voice is balanced just a bit higher to sweeten it. The album is also notable for brief but highly melodic guitar solos; I’d rank the solo from Another Nail in My Heart among my all-time favorites.

If “Pulling Mussels” left you breathless, don’t expect to catch your breath during “Another Nail in My Heart.” I’m not going to lie to you: those two songs stand head and shoulders above anything else on Argybargy. Even “If I Didn’t Love You,” while catchy, isn’t stunningly so. The rest of the material is consistently good but the work of mere mortals. Jools Holland’s Wrong Side of the Moon is a charmer, Separate Beds is yet another in a pleasant line of boys-meets-girl stories and the kinetically charged Misadventure very nearly works. You can also hear hints of the more mature songcraft to come on songs like I Think I’m Go Go and There at the Top.

I could probably subsist entirely on albums released in 1980: Scary Monsters, Peter Gabriel III, Argybargy, Kings of the Wild Frontier, Black Sea, Get Happy!!, The Up Escalator, Zenyatta Mondatta, Remain in Light and I’d give London Calling a little nudge to push it into the new year. In fact, I would tell you that 1979-1981 produced some of the best pop music in history, although that probably says more about my age than any intrinsic merit in the music, since I believe the early teenage years are when we form our strongest associations with music. Teenagers are experimenting with independence and rebellion, and nothing captures those two emotions as perfectly as rock & roll.

All selections written by Glenn Tilbrook and Chris Difford unless noted.