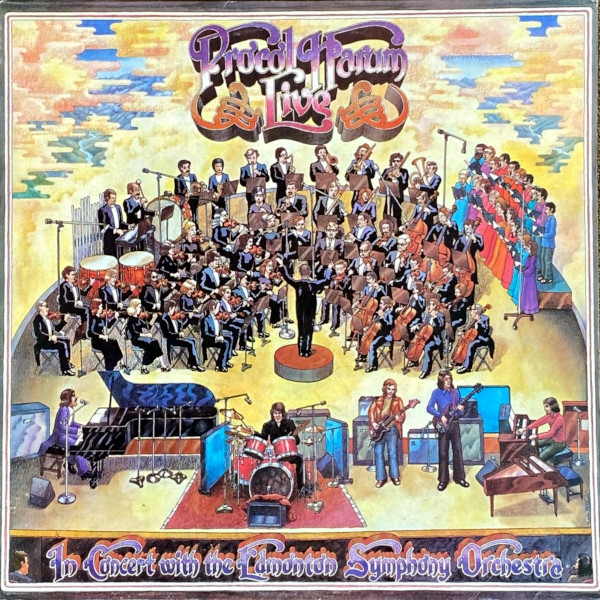 What do you get when you combine a rock band with a full orchestra and chorus? No, seriously, I’m asking.

The whole “rock band with an orchestra” phase was a foolish conceit. The music of Deep Purple, The Who, Rick Wakeman and, here, Procol Harum has each suffered at the hands of an orchestra and chorus. There’s some nobility in the notion of bridging the two genres, but it’s a bridge too far.

To their credit, Procol Harum fare better than most in the pairing, and this with a retooled lineup (shades of Deep Purple’s Live Concert at the Royal Albert Hall) that now included a 21-year-old Dave Ball on guitar and Alan Cartwright (an old bandmate of B.J. Wilson) on bass guitar. My initial reaction to this album was harsh; I called it a “bloated white whale of a record.” Since then, however, I’ve developed a deep fondness for A Salty Dog and Shine On Brightly, albums which account for more than half of this performance.

The record opens with Conquistador, one of several overlooked songs from their first album. In this arrangement, it sounds like a film adaptation of the original. B.J. Wilson overplays, Gary Brooker undersings, and the Conquistador exits with head hung in defeat. Whaling Stories from Home is better; in fact, I prefer this version to the original. A Salty Dog already had strings to begin with, so it sounds as good as I remember (and I remember it being very good). All This And More, from the same album (A Salty Dog), showcases the chorus this time but fizzles out.

The second side is devoted to a full performance of In Held ‘Twas In I from Shine On Brightly. It’s the album’s most ambitious undertaking, given its complexities as a multi-part suite, but the band, orchestra and chorus manage to pull it off. The “Grand Finale” in particular is brilliant, and that moment of completion and jubilation might alone be worth of the price of the disc. Later reissues added a live version of the lovely “Luskus Delph” that had appeared as the B side to the UK single of “Conquistador.”

There are, apparently, quite a few listeners who hold this record in esteem. I am not one of them. In fact, I would tell you that Robin Trower jumped ship just in time, since this would have made an ugly swan song. Given the group’s poetic sensibilities, an orchestral album was likely inevitable, and the effort isn’t a total failure by any means, but a crowning beauty in the harem it’s not.