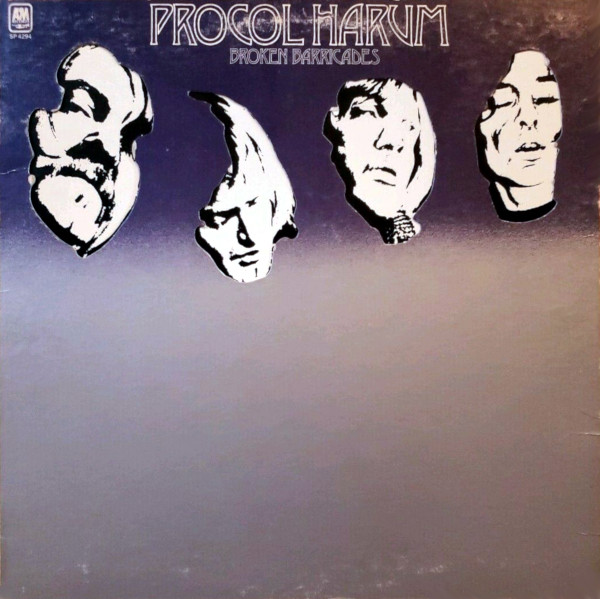 The band’s fifth includes a few great tracks, but the split in musical personalities between Brooker and Trower is increasingly evident.

The first half of Broken Barricades is a fair match for A Salty Dog, which is high praise in these parts. The second half, well, not so much, but half a great album from Procol Harum is nothing to sneeze at. The band’s fifth album is notable as the last to feature Robin Trower, who writes three tracks on here and sings two of them. Suffice to say I didn’t realize how good a singer Gary Brooker was until I heard Robin Trower sing.

The band’s last album, Home, seemed mismatched. Keith Reid’s poetry didn’t roll smoothly from the mouth of Brooker, the melodies didn’t support the lyrical content and Brooker and Trower moved to opposite ends of the musical spectrum. Maybe it was ever thus, but the earlier albums struck me as a more artful balance. That balance returns on the first side on Broken Barricades. Simple Sister sounds like the second coming of “Cross-Eyed Mary,” with its mighty guitar riff and dramatic phrasings. Broken Barricades is a return to the sublime sounds of A Salty Dog or, if you prefer, Genesis. Trower’s Memorial Drive is a blues-based rocker with some graphic language that benefits from Brooker’s vocals. The side closes with one of their loveliest (and most poetic) songs over a long career, Luskus Delph.

For years, Procol Harum has resisted the prog label, and the second side of music bears that out. Trower’s Song for a Dreamer is hippy/trippy stuff, but the rest of the songs are straightforward rockers, no more or less proggy than Elton John’s heavier stuff (a reference point that comes up on this album more often than you might think). Power Failure is the best of the batch on side two; this despite what has to be one of the weirdest drum solos I’ve ever heard (B.J. Wilson deserved a better showcase). Playmate of the Mouth is a boozy number that suggests a nasty version of The Kinks, and Reid leaves the bad taste in the mouth of Trower for the even nastier Poor Mohammed.

The music of Brooker and Trower had become fractured over time, the one leaning toward ambitious rock arrangements with orchestral touches, the other embracing blues-rock and an unhealthy affection for the cowbell. The split should have freed up Procol Harum to make proggier music, only I don’t remember it shaking out that way. Yet the band is still capable of making great music together, as “Luskus Delph,” “Simple Sister” and “Broken Barricades” ably prove.