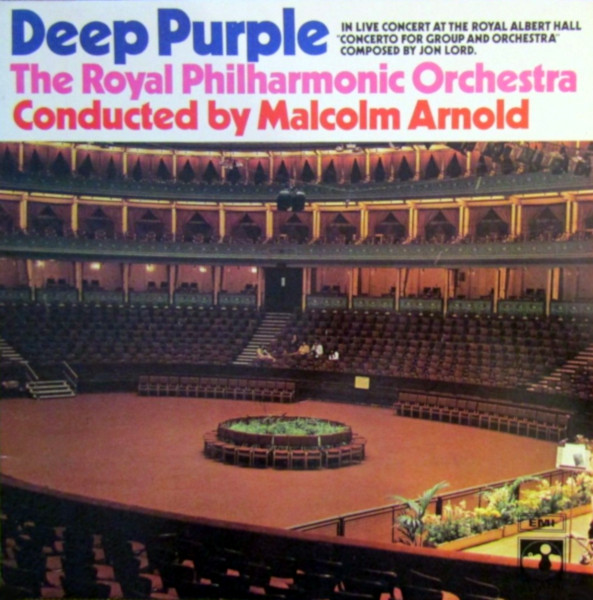 And now for something completely different… a classical rock concerto written by Jon Lord and performed with a symphony orchestra.

Deep Purple re-tooled the band for a heavier sound and tested the new lineup with a live concert in the Royal Albert Hall on September 24, 1969. Featuring a full orchestra. Playing a classical concerto that Jon Lord had written for the occasion. Concerto for Group and Orchestra might be the most unexpected left turn in the history of rock and roll. It is also, unquestionably, one of the earliest masterpieces in the history of progressive rock.

Deep Purple didn’t invent the idea of merging classical and rock music; for that, you’d need to look back to The Beatles, The Moody Blues, The Nice, etc. But they did elevate the idea into something no one else had tried: a synthesis of classical orchestra and rock group featuring music expressly written for the pair. I won’t tell you the mixture doesn’t have its lumps. I also don’t need to tell you how cool it is to hear Ritchie Blackmore’s guitar cut through the classical haze like an electrified demon.

Kudos go, first of all, to Malcolm Arnold and the Royal Philharmonic Orchestra for approaching this at face value; they do a splendid job with Lord’s score. Blackmore and the band also give it their all. Ian Paice’s drum solo in the third movement may be the most amazing thing he’s ever done, and that’s saying something. As for the new guys (Roger Glover, Ian Gillan), you have to sympathize with their symphonic quandary. Glover fits the new group’s ambitions like a glove, while Gillan steals a pair of flattering cameos that set the stage for Emerson, Lake and Palmer but not for the further adventures of Deep Purple.

The next album, Deep Purple In Rock, is Gillan’s proper debut, and it’ll blow you away. For the most part, Lord is the ghost in the machine; he certainly didn’t write an organ conerto. Maybe it was a concession to Blackmore, or a realization that people would rather hear an amazing guitar solo in the middle of a classical concerto than an organ solo.

Although the Concerto went largely unnoticed by American audiences, it’s a significant milestone in the history of rock, even if it isn’t one in the history of Deep Purple. The band’s next album effectively blew up the bridge leading back to Jon Lord’s progressive Xanadu, and in a year’s time the band would be remembered as the loudest rock and roll band in the world rather than one of the world’s first rock bands to perform a new classical work with an orchestra. In later years, re-releases of the Concerto restored the other live material from the September 24th concert: Arnold’s Symphony No. 6 and Purple’s live performances of “Wring That Neck,” “Hush” and a new work, “Child In Time.” I’d spring for the expanded set, since the Blackmore solos alone are worth the extra cost.