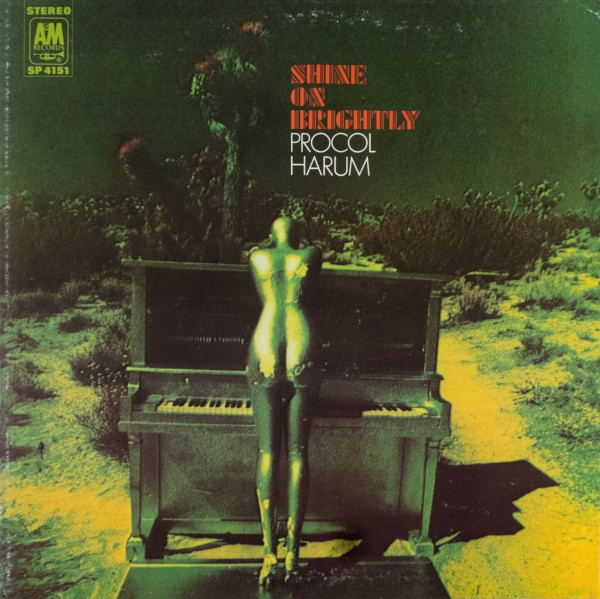 The band forges brightly into future with this literary, ambitious follow-up, capped by the multipart suite, “In Held Twas In I.”

While The Beatles, Cream and Traffic captured the headlines, Procol Harum captured the imagination with their ambitious second album, Shine On Brightly. In my opinion, this is a minor prog* masterpiece, slightly above but otherwise similar to Deep Purple’s second album, The Book of Taliesyn. The comparison may seem odd at first, but consider that both bands had brilliantly talented rock guitarists (Ritchie Blackmore, Robin Trower) smoldering under pages of sheet music and poetry, just waiting to break free.

I can’t remember the last time an album hooked me as quickly as Procol’s second. “Quite Rightly So” quite deftly turns the tables on the artist-audience relationship by positioning the listener as the more enlightened of the two. It’s an interesting move, bold even, that continues as a motif in which Gary Brooker (as the mouthpiece for lyricist Keith Reid) expresses bewilderment at the world around him, from “Shine On Brightly” to the album’s grand closing statement, the 18-minute “In Held Twas In I.” Throughout, Reid’s clever wordplay (e.g., “The chandelier is in full swing,” “Caprice, your bugle blew away the cobwebs from my ears”) is tastefully paired with the piano and organ while Robbie Trower’s guitar assaults the senses in short, sonic blasts. In short, it’s the very model of a modern, major work of art.

The group’s first record was no small achievement, but they achieve higher heights than “Conquistador” and, yes, even that song, the second time around. In describing the Procol Harum sound, it seems equal parts nobility, eccentricity and artistry: Cream, Traffic, Deep Purple and early Genesis (the future kings) come to mind, Bob Dylan briefly too on “Rambling On.” The production reflects the participation of Tony Visconti, as this album feels as much a genial outsider as the work of Mott The Hoople. Then again, Mott seems to be an acquired taste—you either love it or you don’t—so I suspect that Procol Harum’s music will have the same effect.

The album’s crowning jewel, mayhaps the crowning beauty of the Harum, is the mulitpart suite, “In Held Twas In I.” The song’s title is an acrostic, a neat little puzzle formed from the opening words of each movement. If popular music had ever aspired to the realm of art, it was surely here. The different sections offer tantalizing vignettes, from poetic recital to music carnival, closing with the beatific bombast of a Beethoven symphony. It’s a grand ending to a grand album. Unfortunately, subsequent reissues saw fit to add extra tracks to the album; a nice gesture in theory, but the final notes of “Grand Finale” should linger on stage to silent applause, not make way for a history lesson.

*I sway gently back and forth between calling Procol Harum a prog band and not calling them a prog band, because I am a willow undecided on the point.