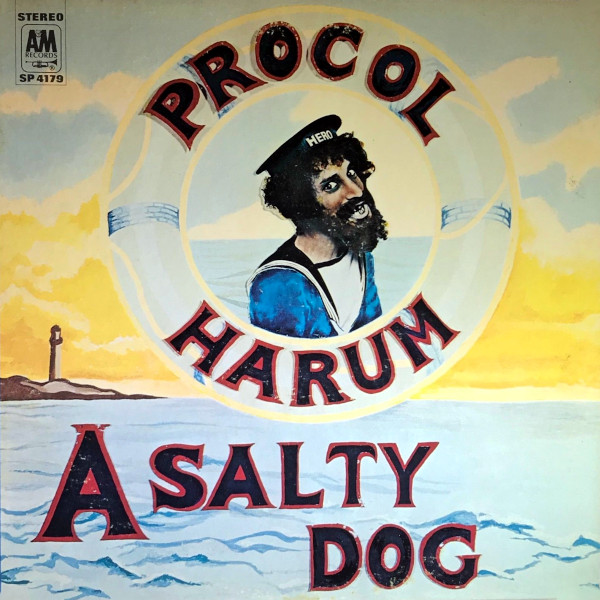 An epic musical voyage, with the band’s collective artistry in full sail and Keith Reid’s poetry as their north star.

Fifty years ago, Procol Harum recorded one of the most ambitious rock records in history, A Salty Dog. Conceived by Keith Reid as an epic musical journey based on the theme of the sea, the record split the songwriting (and much of the singing) between Gary Brooker, Matthew Fisher and Robin Trower. In that sense, A Salty Dog was the first Procol Harum record to move beyond the Brooker-Reid dynamic and showcase the band’s different musical personalities in equal measure. It also found the band experimenting with different musical instruments: celeste, marimba, recorder, congas, tabla.

As good a song as “A Whiter Shade of Pale” is, “A Salty Dog” is the best song the band has ever recorded, even if the “band” in this case omits Fisher and Trower. It is poetry set to music, which would describe most of the Procol Harum songs up to this point, yet it flows from such a natural place that it’s impossible to tell what is poetry and what is music. Reid’s songwriting partnerships with Fisher (“Boredom”) and Trower (“Crucifiction Lane”) are less organic though still highly effective, particularly on “Pilgrim’s Progress” and “Wreck of the Hesperus.”

One of the few knocks I have on A Salty Dog is the state of the singing. You’ll never hear better songs sung so poorly. Brooker was a middling vocalist at best and a shade better than both Fisher and Trower. Reid has lamented in interviews that more bands don’t cover Procol Harum’s songs, and I wonder if that regret isn’t from the realization that “A Salty Dog” or “Wreck of the Hesperus” might have reached truly epic proportions with an epic vocalist like Ian Gillan (or even a good vocalist, like Rod Evans).

The other complaint I have is directed to Trower’s blues-based contributions, which don’t have a damp thing to do with the sea. “Crucifiction Lane” is all right, but “Juicy John Pink” is the sort of track you expect to find tacked on to an expanded remaster, not smack in the middle of one of the greatest rock records of all time. In Trower’s defense, “Too Much Between Us” is a song for the ages, and whatever his contributions were to the song, they have earned him some measure of immortality in my book.

The closing “Pilgrim’s Progress,” sung by Fisher, puts the spotlight where it belongs, on Keith Reid. A Salty Dog is his finest moment; he is the tar that holds the craft together, the captain that steers the work on its epic course. Its silly Beach Boys ending aside, “Pilgrim’s Progress” is Reid breaching the fourth wall as he explains “I sat me down to write a simple story, which maybe in the end became a song.” There has been much conjecture over what that story is. “A Salty Dog” makes plain that the narrator is writing from the other side of life, so perhaps what follows is the seaman’s log of his past life or ruminations on his life from the vantage point of whatever island Limbo he had landed upon. Whether Reid intended it to be a cohesive story or (more likely) a clever device for stitching together songs using the sea as imagery, A Salty Dog is a musical Odyssey of classic proportions.

Orchestral arrangements on A1/B3 by Gary Brooker, B2 by Matthew Fisher.

Art work and design by Dickinson.