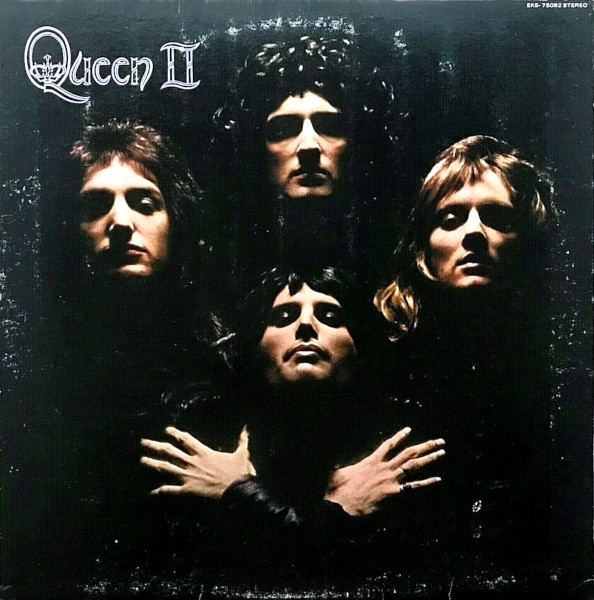 Queen dared to venture deep in the progressive woods with their second album, leaving behind a cherished keepsake for those who would fain live in a fantasy world of fairies, queens and ogres. It’s an ambitious gambit that splits the musical personalities of Brian May and Freddie Mercury into white and black sides, respectively. Some differences emerge, yet the band stays in the same fairytale setting from side to side, even pulling the concept of the queen through the storyline.

Queen II isn’t a complete departure from the earlier Queen. “Great King Rat,” “My Fairy King” and “When the Night Comes Down” would have felt at home on their second album. The group, however, seems far more confident in the studio this time. The guitars from May in particular are a triumph in studio recording, as are the overdubbed vocals and Roger Taylor’s battered drums. After listening to this record and the multitude of sounds that May is able to produce on his instrument, I was fairly convinced that here was a sonic architect of supernatural abilities.

The White Queen side starts with a Procession and reveals that May intends to carefully script his side. Father to Son, which would have been my choice for the album’s single, brilliantly balances the band’s tendencies toward loud excess with sublime passages of prog perfection. White Queen ventures even further into May’s fantasy world; this is probably the proggiest thing they’ve ever done. Some Day One Day continues the winning streak, again with its queenly theme intact, and serves as the end of May’s White Queen song cycle. From a progressive rock perspective, the White Queen suite (as it were) is their crowning achievement. The side closes with a song from Roger Taylor, Loser in the End, that sets the stage for a career of ravers to come. Taylor sings it surprisingly well, but the song is much closer to the amped-up glam of “Black Country Rock” (David Bowie was originally approached to produce the album) than prog.

The Black Queen side starts out equally impressive with the opening Ogre Battle. Nearly operatic in effect, it’s one of the best things Freddie Mercury has ever done, at least in the beginning. The arrangement fails to maintain its initial momentum, unfortunately, and the lyrics aren’t up to Mercury’s usual high standards. The Fairy Feller’s Master-Stroke, on the other hand, features amazing lyrics, and May nearly steals the show with more stellar guitar work. Nevermore is a piano piece that stands as the album’s prettiest track; my only complaint is I would have liked more of it. The March of the Black Queen is the centerpiece of side two, a highly stylized tour-de-force of overdubbed vocals that would become a signature sound for the band. Weirdly, it always reminds me of 10cc, two bands you don’t normally associate. Funny How Love Is departs from the earlier styles, meshing Beach Boys romanticism with a chorus that reminds me of The Mothers. It’s a surprisingly sweet ending to a dark body of work. The album closes with Seven Seas of Rhye, which had first been teased on Queen and was a song that Mercury felt would be more suitable as a single. It wasn’t.

Queen II shows a quantum leap in creativity. As an obvious play to progressive tastes, it’s also an album that will delight prog fans. It may not contain any big hits, but like Rush’s Fly By Night, the band’s ambitions more than make up for any lapses in execution. And to think that Queen would get better…