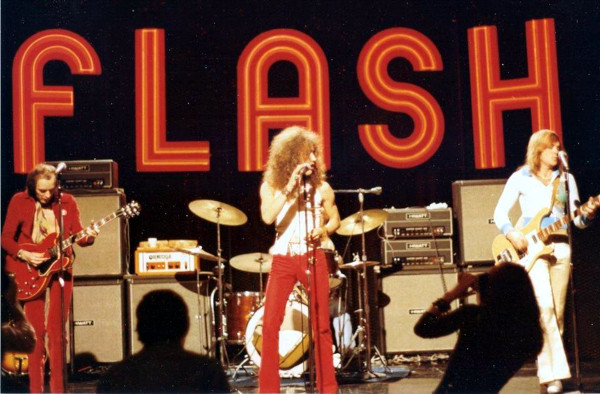 Peter Banks cashed in on his association with Yes in this Yes soundalike group, which released three ambitious albums of progressive rock.

A Flash in the pan?

Peter Banks lasted two albums with Yes. Tony Kaye, three. The pair then re-united in a group called Flash that was plainly patterned after the early music of Yes. While the decision to hire a singer, Colin Carter, who had a high-register voice similar to Jon Anderson was likely not a coincidence, Banks’ guitar sound was already established. In other words, if Banks and Steve Howe sounded similar, it was ever so.

After one eponymous album, Kaye declined an offer to join the band (despite the album’s success), and the group continued on as a quartert with drummer Mike Hough and bassist/vocalist Ray Bennett. In The Can was released six months later but failed to match the success of the first album, suggesting that the group’s moment in the sun had faded. Their final album, Out of Our Hands, appeared the following year, at which point tensions within the band caused the group to fold.

The initial reaction to hearing any Flash album is its similarity to early Yes. In fact, it’s tempting to see the group as a parallel line extending from the first Yes album. But if you forget for the moment that Banks was an original member of Yes, it’s easier to hear Flash as a unique and talented progressive rock group with its own personality. The last album in particular, a conceptual work about chess written mostly by Bennett, was very good and deserved an encore, but the band’s name turned out to be a self-fulfilling prophecy, and they were gone in a Flash.

While a reunion wasn’t in the cards, Banks and Bennett did work together again in Banks’ failed Empire. Bennett and Hough also appeared on Banks’ 1973 solo album, Two Sides of Peter Banks, which is strongly recommended to fans of Flash.

IN PUBLIC (2013)
Live tracks: Cold Cowtown Night / Small Beginnings / Black and White / Stop That Banging / There No More / Children of the Universe / Dreams of Heaven. Released on compact disc on October 29, 2013 in the US (AdequatEsounds, AS01).