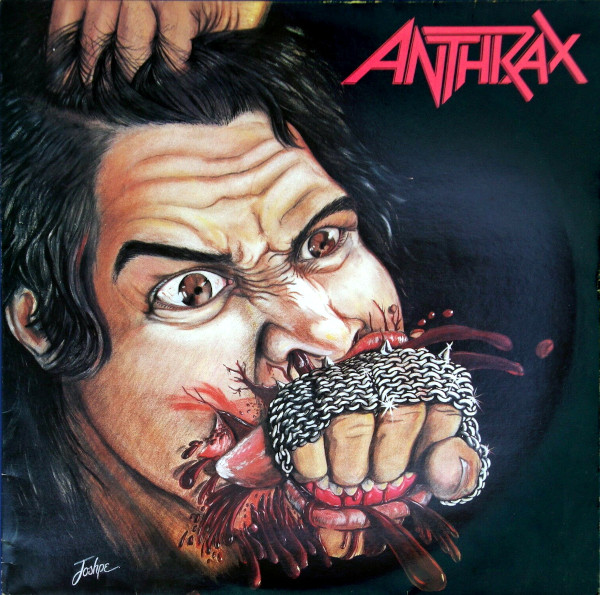 By the mid 1980s, heavy metal had begun to lose its punch. Then Megaforce showed up on the scene with Metallica and Anthrax. These bands took the twin-guitar assault of Judas Priest, Iron Maiden and AC/DC and mounted it to a rocket-launching tank. Fistful of Metal was so new sounding that Kerrang! coined a new term, “thrash metal” (from “Metal Thrashing Mad”), to describe it.

So what does thrash metal sound like? On the first Anthrax album, it sounds like Judas Priest on amphetamines. The lyrics feature dark and violent imagery, the music induces blunt trauma. You can imagine that a youth misspent on reading Weird War Tales, banging your head to Black Sabbath and practicing your instruments could lead to something like this. Punk rock was the end of civility; Anthrax was the end of the world.

As good as this album is, the band would really click on their next album. Neil Turbin’s vocals are an acquired taste, like if Rob Halford acquired Sam Kinison’s voice or if Geddy Lee acquired a penis clamp that didn’t come with instructions. The material would also take a different shape going forward, as most of the songs on Fistful of Metal are written by individuals who were or would soon be former members (Jason Rosenfeld, Neil Turbin, Dan Lilker). I happen to think the material here is very good, but “A.I.R.” and “Madhouse” are on a whole different level.

One of the things you can credit the early incarnation of Anthrax with is consistency. Every song on Fistful of Metal marches forward into battle. Deathrider, Metal Thrashing Mad, Panic and Subjugator each bring the same level of intensity to the listener. Appearing in the middle, to my surprise, is a cover of Alice Cooper’s I’m Eighteen that makes an 18-year-old with an identity crisis sound like the most dangerous thing in the world.

The second side doesn’t take any prisoners. It kicks off with Soldiers of Metal, which served as their first single. Death From Above moves the death rider from the saddle to the cockpit. And, yes, death and vengeance are common themes here, which reveals shared sympathies with the black/death metal movement. Anthrax may be my favorite track on the whole album, and succinctly encapsulates the band’s appeal in three-and-a-half minutes. (I’m already rethinking “succintly encapsulates” in an Anthrax review.) The album closes out with the fitting Howling Furies, which would accurately describe Anthrax Mk. I.

While Fistful of Metal is an impressive debut, it pales in comparison to the band’s next two albums, Spreading the Disease and Among the Living. Those albums removed the cartoonish excess of the first (Kent Joshpe’s cover illustration is a fair approximation of what Fistful sounds like) and got straight to business. Still, the first Anthrax album is historically important in the annals of music as a much-needed antidote to metal ennui.