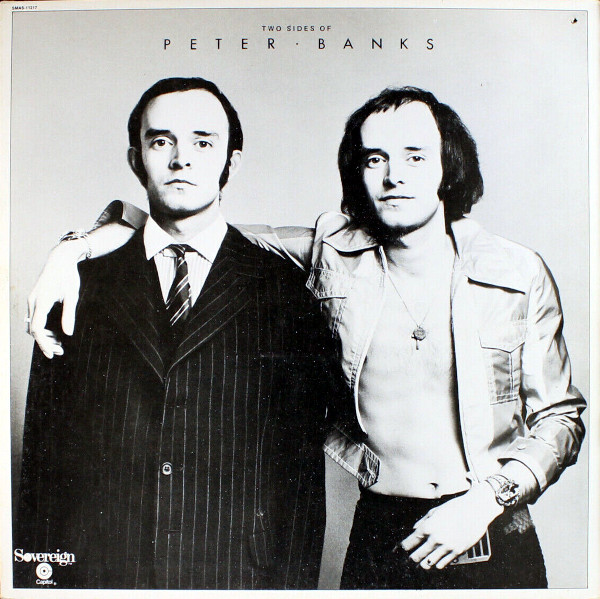 A test run for Flash without the concise songwriting and featuring Jan Akkerman as an extra draw for guitar fans.

Kronomyth 1.0: The tale of two sideburns.

The opening moments always remind me of Tales From Topographic Oceans, which may sound like high praise to some, but I felt that work didn’t walk in beauty so much as meander in it. Two Sides of Peter Banks meanders something awful, as if the guitarist never got around to finishing it.

In its defense, there are some brilliant prog passages on the first side that anticipate the work of Anthony Phillips and Steve Hackett (who actually appears on one track). Other bands that come to mind are Camel, ELP and, of course, Flash. All of which should be enough to pique the curiosity of most classic prog fans, and with good reason. Solo albums are a surprisingly good source of music sometimes: Olias of Sunhillow, The Six Wives of Henry VIII, Voyage of the Acolyte, The Geese and The Ghost, etc. Classic works in their own right, and Two Sides holds their company about half of the time. The other half of the time, Peter Banks is busy unraveling the tapestry he’s created.

The nadir to Knights’ zenith is the aptly titled Stop That!, thirteen-plus minutes of aimless playing that makes the jam side of George Harrison’s All Things Must Pass seem inspired. However, Yes fans in particular are likely to pay close attention to Banks’ every move because his sound is so similar to Steve Howe. That’s where the Topographic comparison holds the most: Two Sides sounds like classic Yes a lot of the time. It wilts under closer inspection as weakly strung together, but there’s no denying it’s inspired in spots. If you believe the magic of Yes is under-mined (and I do, in spite of Starcastle), then Two Sides of Peter Banks is a diamond in the rough. Unfortunately, One Way didn’t bother to polish it for the CD reissue, resulting in still-audible tape hiss and uninspired repackaging.