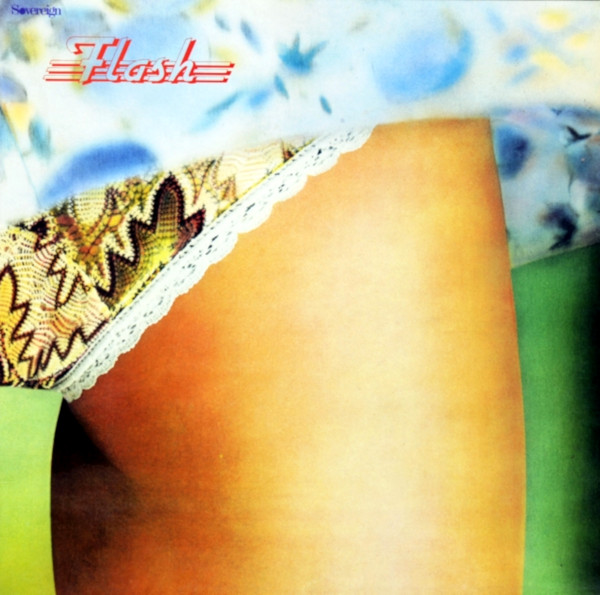 Peter Banks’ band is joined by Tony Kaye on their first album, which features Yes-styled songs only, you know, not as good.

Flash’s claim to fame was the inclusion of not one but two original members of Yes: Peter Banks and Tony Kaye. Their first album sounds uncannily at times like the first few Yes albums. That’s not lazy criticism on my part; the first Flash album is clearly patterned after Yes, down to the heavy bass playing and the hiring of a Jon Anderson (sort of) soundalike, Colin Carter. It is, however, a clumsy copy of Yes most of the time. Now, there are worse things than copying Yes, arguably the greatest progressive rock group of all time. But, for the most part, the first Flash album reaffirms that Yes was right to jettison Banks and Kaye in favor of Steve Howe and Rick Wakeman.

That unpleasantness out of the way, the fact remains that Flash is still a good progressive rock album, and the inevitable comparisons to Yes are unfortunate, since how many bands would come off looking good in a side-by-side comparison with Yes? The opening Small Beginnings, which was selected as the album’s single, starts with some acrobatic guitar playing and reminds me of Yes’ arrangement of “Every Little Thing” from their first album. Honestly, Banks had better solos on the first two Yes albums; the solo tradeoffs between Banks and Kaye at the end are frankly unspectacular.

Morning Haze, one of two tracks written by Ray Bennett and the only track on which he takes lead vocals, doesn’t sound anything like Yes and suggests that the band would have been better served by following a different path. It reminds me of Procol Harum’s acoustic songs, particularly in how the sneaky melody gets under your skin. Banks adds some really nice Spanish guitar on this song; maybe he should have played more acoustic on this album. Children of the Universe would get my nod as the album’s best track, mixing elements of the first Yes album and “Perpetual Change” with the band’s own unique sound (Bennett didn’t carry any baggage from Yes, and so his songs had more of their own personality).

Dreams of Heaven could be heard as the band’s attempt to replicate “Roundabout,” with Banks’ acoustic guitar giving way to a loud, driving prog song before presenting a series of different sections. The band’s arrangements are all over the place, and the production from Derek Lawrence (Deep Purple) is over-the-top, as though Lawrence were trying to cobble together the majesty of Yes from inferior parts. This probably would have worked well as a six-minute song, but at thirteen minutes it exposes the seams in their music. The Times It Takes is more or less a rewrite of “Then.” I know, you’re getting tired of the Yes comparisons. It’s the album’s fatal flaw, really. If it’s any consolation, the band develops a stronger identity on their next two albums.

Despite being their most popular album, I don’t consider Flash their best album. Even Tony Kaye didn’t see a future for the band, declining the offer to join full time; he is technically a guest on this album, and noticeably absent (I’m pretty sure) from the gatefold photos. Yes fans will, of course, find this album irresistible, though all of the original Yes albums (including Tormato) have more to offer. It’s not a bad record, especially if you enjoy prog, it’s just not a very good Yes album, which is (I believe) what it purports to be.

Cover design and photos by Hipgnosis. Tinting by Maurice Tate.