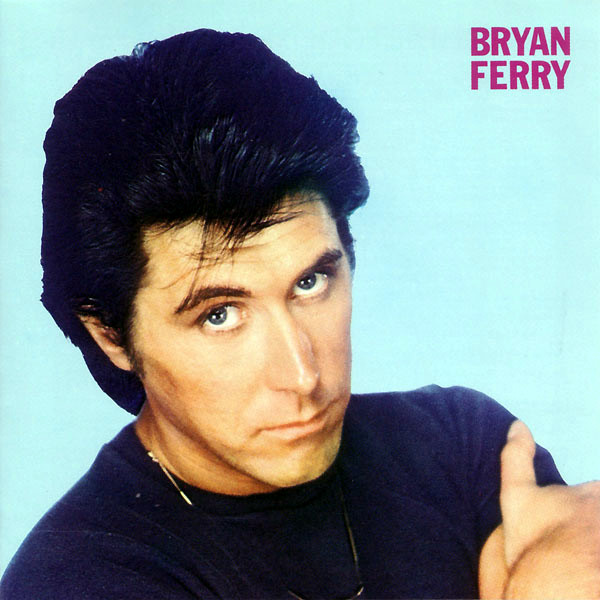 Ferry turns his revolutionary eye to rock & roll classics and performs them in his own particular, aagh, idiom.

Queen Syrenia sat in her stone chair, caressing a Grecian urn of Elvis with hands loitering at the loved handles in quiet lament, when what should shake her sequined kingdom but the sound of the bard, too beloved, being strangled in the mouth of Bryan Ferry with a “Why, doom-crooner of the ages?” Could this be the same BF of stargazed schoolgirls, their nouveau jeans marked by late-night kneeling at the shrine of le Strand, he on whom the future so much depended like a lipstick-red wheelbarrow hauling manna over the scorched earth of meaningless sixties pop?

Just as the bard’s mad prophecy ended, the wheelbarrow tips over to reveal that the Bogus Minstrel has been carefully picking up despised pieces of pop music along the way--Lesley Gore, the Paris Sisters, the Beatles and the Stones—with the intent of Heaven only knows. Ferry’s first is disturbing: “Sympathy For The Devil,” “A Hard Rain’s A-Gonna Fall.” It’s romantic: “These Foolish Things,” “Don’t Worry Baby.” It borders on being tasteless: “It’s My Party,” “Piece of My Heart.” Yet, lost in a moment, perhaps in the closing minutes, the urn falls absentmindedly from regal fingers and rolls unheard into some dusty corner, where it watches in silent envy as a new shape assumes its pedestal, one with a continental flair for trendmaking and trailblazing.

Like the emperor’s new album, we adjust our tastes, convinced that Ferry’s must be the finer palate. Had we spit out “River of Salt” in haste, or missed the mystery of “I Love How You Love Me?” Or was the new king of pop merely a junk collector at heart? It still eludes me today, this enigmatic entrance. Whatever angle you’re coming from, urn for a big surprise.