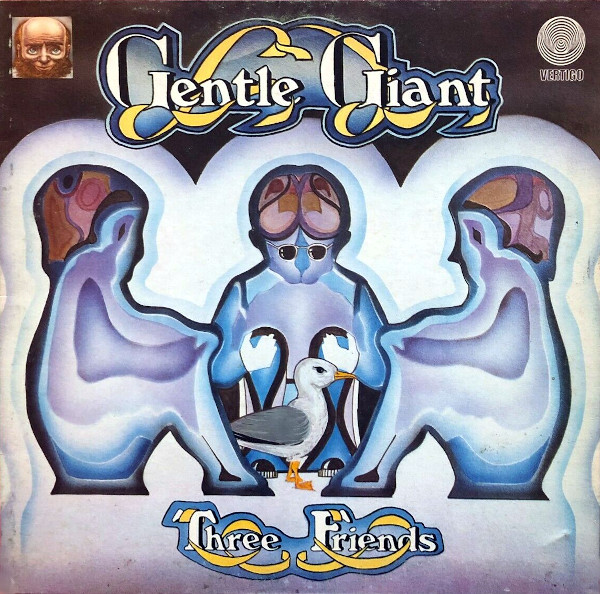 Kronomyth 3.0: People, let me tell you about their best, Three Friends.

For years, whenever I purchased a new piece of stereo equipment, I always tested it first with my pristine vinyl copy of Three Friends. Not only does the album boast amazing dynamic range, but I’d memorized every note and nuance, so I could instantly discern whether the new equipment was capturing the highs and lows correctly. Sure, I could have used Jethro Tull’s Songs from the Wood or Yes’ Close to the Edge, I suppose, but nothing seemed to put my stereo system through its paces quite so well as Gentle Giant’s magnum opus. (Actually, their magnum opus would be “Three friendly, powerful and glorious octopi in a glass house,” since crowning one album over another is usually fool’s work.)

It’s hard to know where to begin in describing what makes this album better than their first two. Suffice it to say you could drop the needle anywhere on this record and encounter breathtaking music. As if the musical arrangements weren’t impressive enough on their own, Gentle Giant does it in the context of a concept album about three school friends who grow apart as they age. As a prog fan, this album pushes every imaginable musical button. There are intricately woven arrangements, moments of quiet beauty and apocalyptic destruction, a sense of humor you rarely encounter in prog and more ideas than most bands have in a lifetime.

The opening Prologue begins with multitracked piano and Moog. Throughout the album, Kerry Minnear does the work of four hands (or half an octopus). New drummer Malcolm Mortimore makes an immediate impression; unfortunately a motorcycle accident ended his career with the band after only one album. (Mortimore and guitarist Gary Green would later go on to form a band called Three Friends.) The presence of two lead vocalists, Derek and Philip Shulman, creates a dreamy atmosphere on many of the songs, perhaps nowhere better than on Schooldays. Minnear introduces the vibraphone on this song and even adds a vibraphone solo toward the end. Working All Day teases with an opening time change before launching into their heaviest number to date.

Peel the Paint morphs from a medieval-themed piece into an explosive rock song featuring organ, electric guitar and saxophone. I’ve developed a kind of Pavlovian response to this song, in that I start salivating as the first half winds down and the second half winds up. Also featured in the second half is my favorite Gary Green guitar solo. Mister Class and Quality is light on its feet while the instruments mesh like gears on a Swiss watch. It’s interesting to note that Gentle Giant doesn’t seem to favor the worker, artist or capitalist in their career assessments. The album closes with the epic Three Friends, which ties everything together and leaves on a grand note.

Both Gentle Giant and Acquiring the Taste are excellent albums, but Gentle Giant took their music to another level on Three Friends. The band’s ambitious arrangements never feel forced, but flow naturally as though every member were part of a single organism. Or maybe it’s just that the music is brilliantly scored; Minnear was, after all, a graduate of the Royal College of Music, and Three Friends in many ways is scored like classical music. While I would stop short of calling it the greatest progressive rock album ever made, it may be the greatest progressive rock album that most people have never heard.