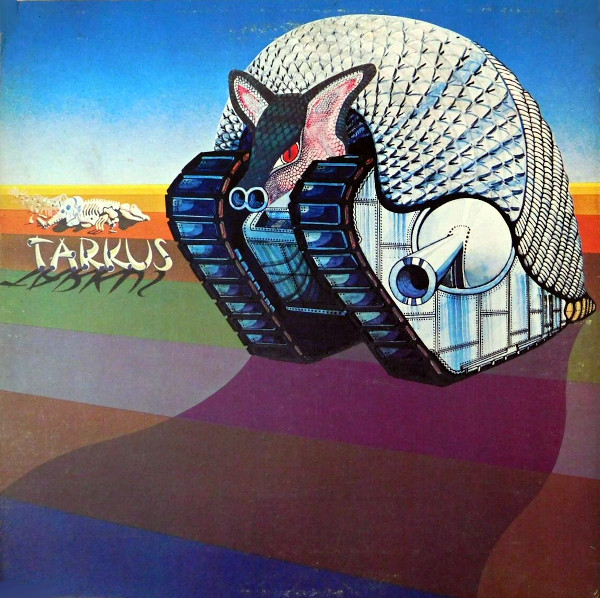 Yes, listening to this album is exactly like being run over by a giant, cannon-toting armadillo tank.

As an impressionable youth, I remember poring over the inner gatefold of Tarkus, convinced that a deep truth was contained in its monstrous storyboard. Maybe we were all the misunderstood tarkus, invincible in our youth until met with inevitable manticore of middle age. Today, I would probably concede the “story” to be as nonsensical as the lyrics to Jeremy Bender. And yet the tale of the tarkus remains lodged in my memory like a dream half-remembered.

Where the trio’s first album was the work of two separate songwriters, Keith Emerson and Greg Lake, Tarkus finds the pair writing collaboratively. The result is a more cohesive record, one on which Lake’s lyrics and voice receive an elevated platform and Emerson’s classical arrangements get full buy-in from the band. Emerson, Lake & Palmer entered rarefied air on this album, a space sparsely populated by the likes of Yes and King Crimson and few others. The precedent for the band’s classical-rock hybrid, of course, lie with The Nice, but it took ELP to build a proper castle on that foundation.

The side-long suite, Tarkus, is a clever device for alternating between Emerson’s classical workouts and Lake’s Crimson-shaded songs. The opening seconds of peaceful synthesizer are the brief calm before a rush of organ, bass and drums overtakes the listener. Jostled by waves of sound, the listener can do little but hold on for dear life. Stones of Years, the first of the suite’s three songs, suggests a darker side of “Moonchild.” The brief Iconoclast serves as a connector to the next song, Mass. Its dim view of the clergy aside, the lyrics are appreciably clever; I’ve never fully understood why the band brought in Peter Sinfield when they had a perfectly viable lyricist in Lake. Another instrumental artifice appears, Manticore, heralding the heavily English Battlefield, an elegy of war. The song features a rare Greg Lake guitar solo that sounds like a slower version of George Harrison or David Gilmour. The closing Aquatarkus is a coda that bears a striking similarity to the end of “Perpetual Change” but with some strange synthesizer choices, then unexpectedly returns to the opening movement.

The second side is a collection of songs that effectively mixes light and dark. “Jeremy Bender” is a joyous if salacious bit of storytelling that reveals Emerson’s interests in ragtime. Bitches Crystal and A Time and a Place are both heavy numbers on which Emerson more than makes up for the band’s lack of an electric guitarist. The Only Way (Hymn) is an impressive showcase for pipe organ, as reverent as Infinite Space is impious. The band seems to release all the pressure built up over the course of Tarkus with a silly rock ‘n’ roll number dedicated to the album’s engineer, Eddy Offord. Not their most timeless song, Are You Ready Eddy? is an ending for the ages all the same.

One thing that has always bothered me about this album is the missing name of Carl Palmer on most of the songwriting credits. He was no mere keeper of beats but a co-creator whose complex rhythms drove and shaped the music. From a purely performance standpoint, Tarkus is Palmer’s triumph. Drummers in general seem to get shortchanged on this point, but few contributed as much to the final product as Palmer. Okay, I feel better now.

I realize there are some for whom ELP will always be associated with overblown rock, and Tarkus is unlikely to disavow them of that notion. Yet there is a distinction to be made between “pomp” and “pompous.” Tarkus has plenty of the former but takes pains to avoid the latter. It stands, in my view and that of many prog fans, as one of the genre’s crowning achievements, noiting that the crown wouldn’t slip from ELP’s head for several albums still.