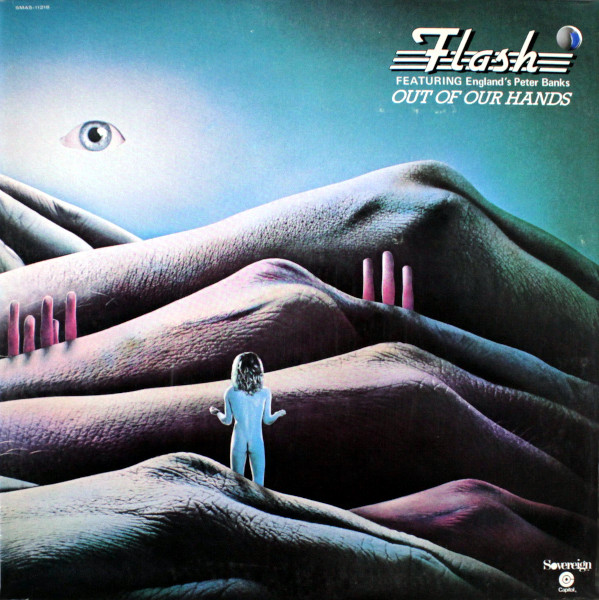 The final move before Flash checkmated themselves out of existence, collected their pieces and went home.

This concept album about chess and an interstellar messenger of peace sums up what was best and worst about Flash from the very beginning. They had enough big pieces on the board to win, but never had a winning strategy. You’ll find flashes of brilliance on every Flash album, and Out of Our Hands is no exception, yet the band seems incapable of parlaying it into something bigger. In a way, listening to Flash is like listening to Tales From Topographic Oceans. You’ll think “there’s a good idea” or “ooh, that’s interesting,” and before anything comes of it the band is onto something else.

Despite being billed as “Flash featuring England’s Peter Banks” (a distinction only the American Peter Banks likely appreciated, whoever he was), Out of Our Hands is mostly Ray Bennett’s brainchild. He writes the songs and doubles up on bass and keyboards. In typical Flash fashion, even the band seems bored with their own concept, ending it early to make space for a pair of songs from Colin Carter. That’s a bit of a shame, since I like concept albums and Carter’s two tracks could have been welcome additions to the story with a little lyrical tweaking. You have to wonder if the band’s lack of musical chemistry wasn’t a case of weak arrangements or strong personalities. (Also, releasing Peter Banks’ solo album at the same time probably wasn’t a great sign of unity.)

The band’s first move is a solo statement from the guitarist, Open Sky, which was fast becoming a progressive trademark. A few soothing chords, the antithesis of a classical guitar thesis, and we’re off on our adventure. None the Wiser introduces the idea of a hero who will travel the stars to bring wisdom and truth. The impression, as with most Flash songs, is that Banks and the band had returned to the early haunts of Yes, now abandoned. Farewell Number One sets the prince off on his adventure with an acoustic song that ends, strangely, with a heartbeat. Man of Honour contains some of the tantalizing strands of magic common to every Flash album, particularly at the end. Lyrically, the song introduces the hero’s younger brother. I think. I never had the patience for chess. Dead Ahead is a slightly shrill portrait of the queen. If you’ve ever listened to Jon Anderson and didn’t have the headphone jack plugged in all the way, well, there you go.

Side two introduces the villain, The Bishop. Honestly, there’s no linear story to speak of here, just portraits of different players in a story that we’re mostly left to imagine. The elastic bass lines and ambitious arrangements at mid-gallop put us clearly in proggy pastures. You could see parts of A Passion Play turning into this if they weren’t reined in. All ends well on the multipart Psychosync, as the hero returns with newfound wisdom, our collective psyches are synchronized (apparently) and the concept’s most captivating melody (which always reminds me of Steve Howe’s “Lost Symphony”) lingers just long enough for us to wish there were more to tell. What follows are two standalone songs from Carter: the sweetly sour Manhattan Morning and a grand finale in Shadows.

And there ends the story of Flash. Although they never emerged from the murky woods of early Yes, they managed to have a few noteworthy adventures in there anyway. Their greatest crime was moving in circles rather than moving forward, but there are worse places to be stuck than the primeval forest of prog. Empire, well, that’s a crime of a very different sort…

Cover design and photographs by Hipgnosis. Tinting by Philip Crennell.