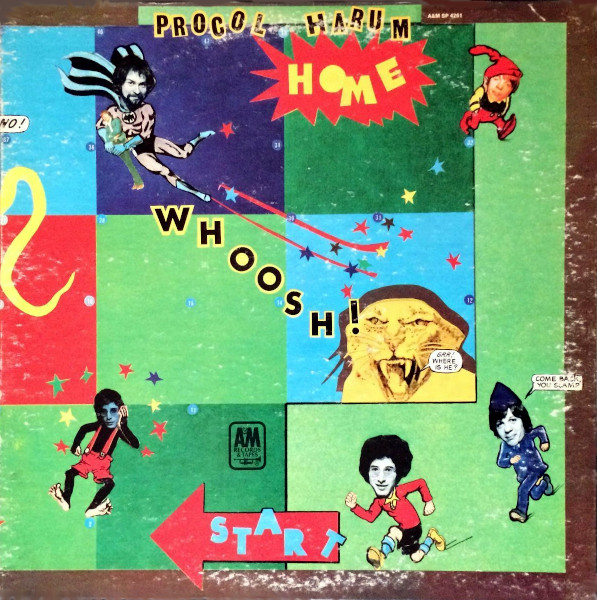 Macabre ruminations from the poet in residence and great guitar licks (but few memorable melodies) sum up Procol’s fourth.

After the remarkably smooth sailing of A Salty Dog, Procol Harum heads into murkier waters with the macabre Home. The hard rocking “Whisky Train” and its herd of cowbells aside, the band’s songwriting approach of setting music to Keith Reid’s lyrics proves to be problematic this time. Gary Brooker and the band are given the nearly impossible task of wrapping tunes around such lines as “Their eyes were alive with maggots crawling” (Dead Man’s Dream), “I’ll blacken your Christmas and piss on your door” (Still There’ll Be More), “The streets awash with blood and pus” (Piggy Pig Pig) and other such cheery sentiments. You know you’re headed for a dark place when even the Christmas songs are sinister.

All that darkness might not have been Home’s undoing if the band had been able to match Reid’s ever-artful lyrics with equally deft arrangements, but they don’t. “The Dead Man’s Dream” and “Whaling Stories” unravel slowly, sometimes painfully. It doesn’t help matters that Harum is down a man, having replaced both Matthew Fisher and David Knights with former Paramounts mate Chris Copping. It’s a thankless task Copping is given, and he exonerates himself well enough on organ, yet you can’t help but feel he’s trying to copy Fisher with his politely baroque mannerisms. The arrangements thus fall directly on the shoulders of Brooker, and he shrugs off a few of them with placeholder patches.

All that noted, Home isn’t a bad album. Many have taken its dark musings in stride, and some have even discovered magic and much hidden meaning in its midst. I applaud the band’s ambitions and enjoyed Robin Trower’s contributions on most of the record. “Whisky Train” isn’t exactly my cup of tea, but the acoustic “Nothing That I Didn’t Know” is lovely (between this and “Too Much Between Us,” I believe Procol probably has a very good folk rock album in them) and the heavy Traffic sound of “About To Die” is a nice change of pace for them. “Piggy Pig Pig” is also one of the album’s better tracks, hams down.

Until now, every Procol Harum album was progressively better than the last. Home, however, is a disappointment after the sweeping, cinematic Salty Dog. Reid’s lyrics are never a liability (his girlfriend’s album cover designs are another story), but the band’s artistic aspirations get the better of Brooker this time. Without Fisher, Procol Harum might want to tighten their arrangements to something more suitable for a quartet, or at least get on board with Trower’s more rock-oriented vision for the band. Or, you know, hire Wooly Wolstenholme away from Barclay James Harvest and keep making orchestral prog albums. That also would have worked.

All songs written by Gary Brooker and Keith Reid unless noted.

Album cover art work and design by Dickinson. Photograph by David Bailey. Inside layout by CCS.