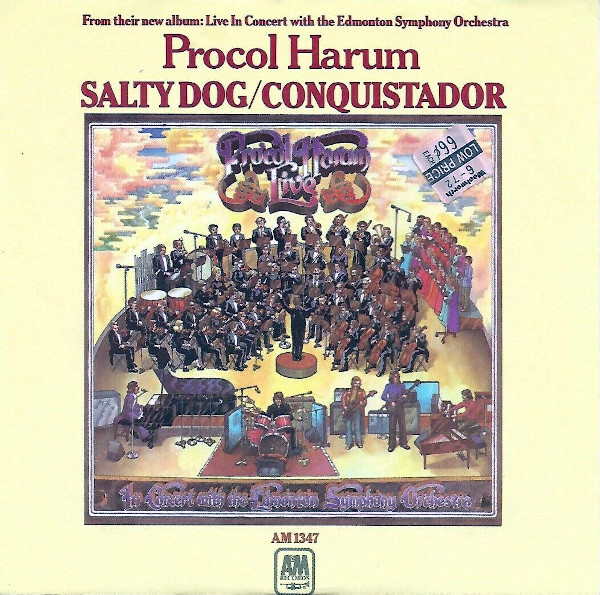 The ornate rock of Procol Harum plus an orchestra proves to be a double-edged, jewel-encrusted sword.

Kronomyth 6.1: The great night worth.

The Procol Harum/Deep Purple connection got a bit deeper when Procol Harum released the orchestral live album, Live in Concert with the Edmonton Symphony Orchestra. (I have no idea what the connection was between Procol Harum and Canada.) The evening featured some of the group’s more ambitious works, including “Conquistador” from their first elpee and “A Salty Dog.” With the extra players, “Conquistador” comes across a lot hornier than I remember, but “A Salty Dog” is tastefully seasoned by the orchestra.

In the UK, a live version of “Luskus Delph” from the same concert was included as the B side. It was originally left off the album, but later included for the expanded compact disc reissues. I’m not completely sold on the idea of Procol Harum with an orchestra; Gary Brooker’s voice tends to get lost in the mix, although drummer B.J. Wilson holds his own against them and then some. Generally, the songs that already featured strings (“A Salty Dog,” “Luskus Delph”) suffer the least at the hands of the Edmonton Symphony Orchestra.