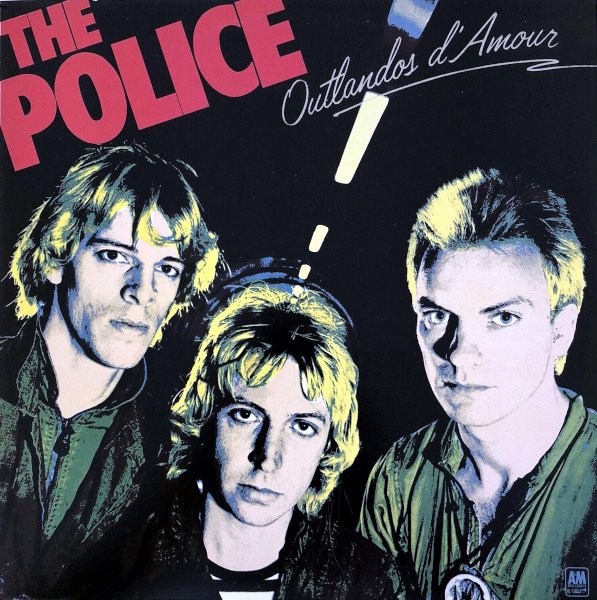 Sounding like a cross between Cheap Trick and The Clash, The Police burst on the scene with this brilliant, energized debut.

This is one of the first albums I owned as a kid and I played the snot out of it. Same thing with Zenyatta Mondatta. I fell hard for The Police from the moment I saw the video for Roxanne. Most thirteen-year-old boys didn’t fantasize about being Joe Strummer or Rick Nielsen or Joe Jackson. But Sting? Yeah, that would work.

Of course, The Police had all the right connections. And they weren’t exactly kids; Andy Summers was 35 when Outlandos d’Amour was recorded, and Stewart Copeland had already logged in some serious rock & roll miles as a road manager for Curved Air and Joan Armatrading. The band’s fresh take on the punk/reggae phenomenon, fashionable appearance and unquestionable talent made them an instant sensation.

On their first album, The Police hadn’t completely abandoned the idea of being a punk band. Next to You, Peanuts and Truth Hits Everybody are all high-energy numbers that could have passed for punk in 1978. The band was equally interested in playing reggae in a crisp and sophisticated style, heard on So Lonely, Can’t Standing Losing You and, most famously, “Roxanne.” These songs became the singles from their first album and, thus, were most closely associated with the Police “sound.” People who picked up the album also discovered the band had a sense of musical adventure and humor, as heard on Be My Girl/Sally (featuring Summer’s bawdy tale of an inflatable doll) and the closing Masoko Tanga, which combines African rock with Sting’s speaking in tongues.

As brilliant an album as it is, Outlandos d’Amour is still a bit rough around the edges. Born in the 50’s and “Be My Girl” are underdeveloped ideas. Sting’s attempts to grab for something deeper in his vocals sounds like a man clearing his throat. And while I’m picking on Sting, his bass playing needs to get better if the band is going to continue as a trio. (It did, and you couldn’t reasonably expect the man to do everything perfectly.)

Outlandos d’Amour is not The Police’s best album. Neither is The Clash, My Aim Is True or Look Sharp the best album by their respective artists. But did The Police ever record a song better than “Roxanne?” Or The Clash “London Burning?” Or “Is She Really Going Out With Him” or “Alison?” These albums are like first loves, attaining a kind of mythic status even as our memory of them fades. Returning to them after so many years, we fall in love with them again, our old passions rekindled, the lost paramours of illicit youth. Moving seamlessly from the poetic to the pedantic, the album was originally released in three color variations (red, yellow, green) resembling a stop light, while the US version removed the highway lines that emanated from Andy Summer’s head.

Songs written by Sting unless noted. All songs arranged by The Police.

Art direction by Michael Ross. Photography by Janette Beckman. Design by Les May.