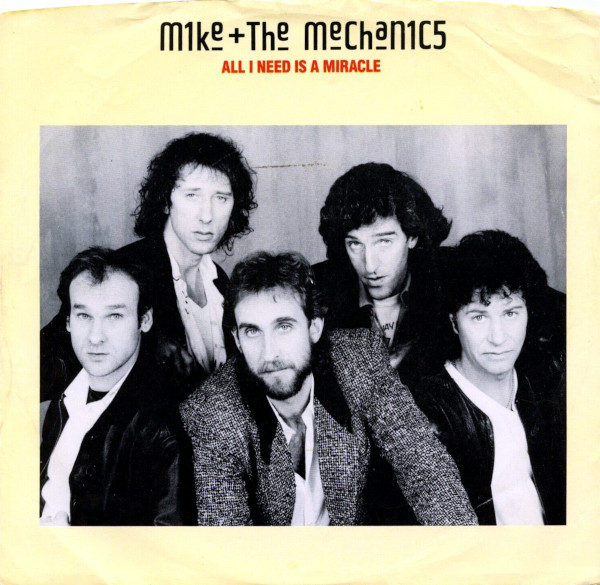 Mike Rutherford got his miracle with a second Top 10 hit, giving the Genesis juggernaut a run for its money.

With the Genesis machine approaching full power (Invisible Touch), Mike Rutherford found himself the center of attention for a change with Mike + The Mechanics. All I Need Is A Miracle is the best song from the Mechanic’s debut, a boost of adrenalin and optimism that perfectly captures the idealism of the 80s. It had a good hook, a great chorus and a nice balance of human energy and machine technology. Naturally, it felt like fingernails on a blackboard to me, but I was still holding a torch for “Time Table.”

The B side, also from their debut, is You Are The One. This song has that slower Rutherford feel, and you can hear where this would have worked in the context of Genesis (cf. “Alone Tonight”). Both tracks were co-written with Christopher Neil and, on the heels of listening to Elliot Easton’s Change No Change, I’m coming around to the idea that pairing a professional musician with a professional songwriter is a good formula for success (so long as that songwriter isn’t named Diane Warren).

In the UK, a remixed version of “All I Need Is A Miracle” was released. It plays up the mechanical side of the song with lots of studio tricks, but the effects are mostly a distraction. A slightly edited version of the song also appeared on a promotional single. And, of course, there was the requisite music video. The video features actor Roy Kinnear, who passed away in 1988. The video below is a short BBC documentary on Kinnear’s career.