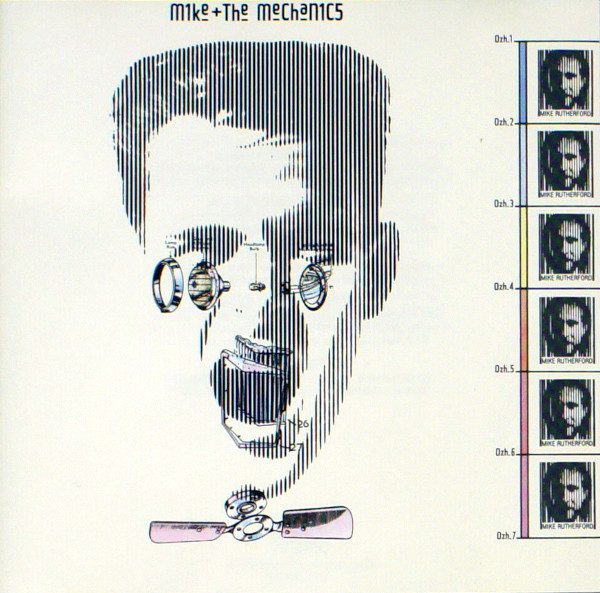 Mike Rutherford tinkers with the new Genesis sound and creates an album tailor-made for the pop charts.

Kronomyth 3.0: And then there were three lead vocalists.

Up until now, I didn’t have a lot of skin in Mike Rutherford’s solo comings and goings. Every other member of Genesis past and present had released at least one album that I loved except him: The Geese and The Ghost, Voyage of the Acolyte, Peter Gabriel III, Face Value, The Fugitive. Then came Mike + The Mechanics. Released with an ad-hoc band that included Paul Young, Paul Carrack and a few guys not named Paul, the album gave Phil Collins, Genesis (currently on hiatus), Foreigner and Asia a (silent) run for their money.

Compared to Rutherford’s previous solo albums (Smallcreep’s Day, Acting Very Strange), Mike + The Mechanics is a quantum leap in quality. Producer Christopher Neil (late from Toyah’s Minx) polishes Rutherford’s songs into high-production numbers, while Paul Young, Paul Carrack and John Kirby (the lead singer of Wavelength, whom Neil had produced) provide Rutherford with an enviable trio of voice choices. The results sound a lot like mid-80s Genesis (not by accident) with Asia and Foreigner mixed in; a pretty good recipe for success in 1985.

The songs, written by Rutherford, Neil and B.A. Robertson, mix matters of the heart with global politics; strange bedfellows at any other time except the mid-eighties. The opening Silent Running is the best of the political songs. At first, it sounds like you’re breathing until you realize you’re listening to music, which slowly builds like “Watcher of the Skies” before the clouds burst and the song is revealed. It’s masterfully done (Paul Carrack really rises to the occasion) and remains, for me, the album’s best track. What follows is the next best track, All I Need Is A Miracle, a brilliant pop song with a great performance from Paul Young. The pretty Par Avion, this time featuring John Kirby on vocals, borrows the sound of Genesis/Phil Collins “(“In Too Deep”). The fact that this and the next track, Hanging By A Thread, amount to album “filler” is a testament to the record’s quality.

The second side starts with an ill-advised attempt to re-create Phil Collin’s success with Motown, since there’s a finite number of pasty-faced white guys who can milk the nostalgia of Motown. Take The Reins is passionate and precise, though I have no idea what it’s about—maybe an eldest song announcing independence from his father? The album closes with a pair of lovely, gauzy ballads (You Are The One, Taken In) and one last political rallying cry, A Call To Arms. It’s a strong finish to what is handily Rutherford’s best album so far.

I have to confess, I didn’t care for this album when it was released. Or Astra. Or Agent Provocateur. Or anything that sounded like prefabricated product. Prog was dead and I had run headlong into the waiting, consoling arms of punk music, which was also dying. After that, I listened to classical music for a while. Good music stands the test of time and, over time, I’ve learned to appreciate the first Mike + The Mechanics album because it contains some very good music. Tony Banks liked the idea enough to hire his own mechanics for Bankstatement a few years later. And, of course, Rutherford continued to crank out popular music with that side project of his, Genesis.