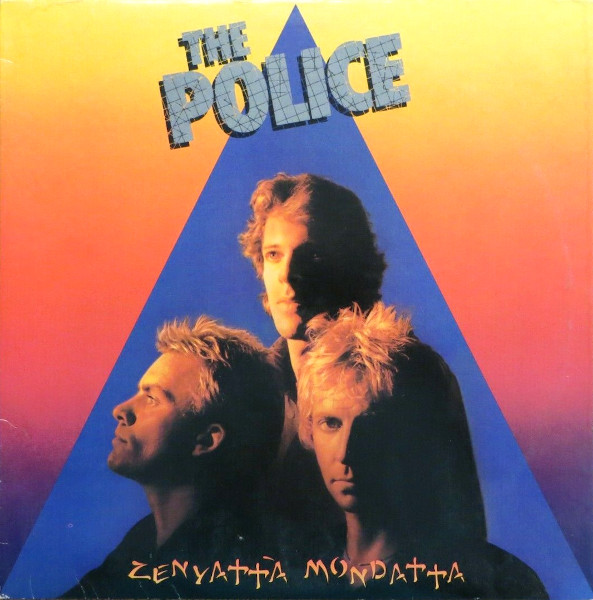 Sting’s intellectual and musical presence is stronger on their third (and arguably best) album.

Kronomyth 3.0: Zen and the yada of musical maintenance.

Sting the literate crusader and social crusader emerges on Zenyatta Mondatta. The references to Vladimir Nabokov (Don’t Stand So Close to Me), global suffering as theater (Driven to Tears) and the brutality of thought (De Do Do Do, De Da Da Da) were not the province of the average pop band. Add to that the increasingly sophisticated playing of The Police and you had what might have been the most perfect pop group since The Beatles.

I thought the trio’s first album, Outlandos d’Amour, was an instant classic, but they seemed to be running out of steam on Reggatta de Blanc. The group’s third album, however, might be the best thing they’ve ever done. It’s one of the few albums I consistently listen to from beginning to end, savoring every song along the way. Beyond the big hits, Canary in a Coalmine, Man in a Suitcase, Bombs Away and When the World Is Running Down… remain personal favorites of mine.

As I’m wont to mention, 1980 was a watershed year for music; an observation that may have more to do with my age at the time than what I sensed to be the imminence of 1984 and its social reckoning. Many artists were embracing world music at the time (Talking Heads, Peter Gabriel) and the electric guitar in particular was undergoing a metamorphosis from melody to texture. Zenyatta Mondatta embodies that future as well as any album, from its complex polyrhythms to its carefully sculpted guitar sounds. Even Sting had grown into a formidable force on bass guitar, so that at no point does a fourth player feel necessary.

One thing worth mentioning: with Zenyatta Mondatta, The Police had more or less become Sting’s band. You could argue it was ever so, but the songwriting seemed more balanced on earlier albums, whereas now the contributions from Stewart Copeland and Andy Summers feel like the work of a different band. Given the egos involved, this didn’t bode well for the future, despite the playful prancing about that constituted most of their music videos up to this point.

Songs written by Sting unless noted.

Original 8-track version
A1. Don’t Stand So Close to Me
A2. Driven to Tears
A3. Man in a Suitcase
B1. When the World Is Running Down, You Make the Best of What’s Still Around
B2. Canary in a Coalmine
B3. Voices Inside My Head
C1. Bombs Away
C2. Behind My Camel
C3. The Other Way of Stopping
D1. De Do Do Do, De Da Da Da
D2. Shadows in the Rain