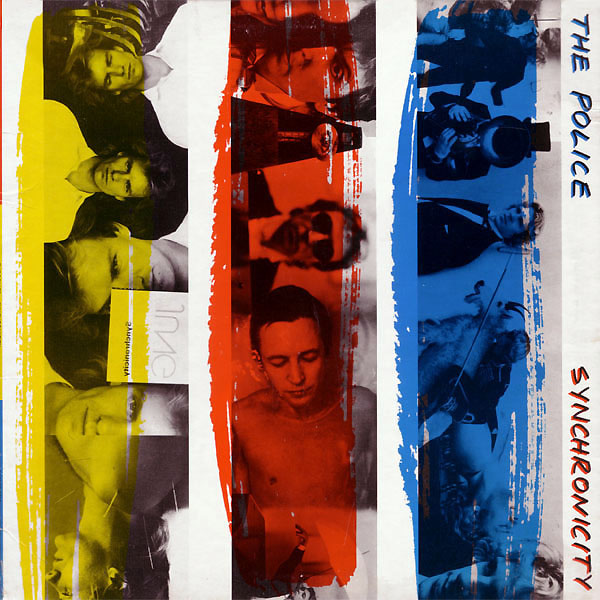 The Police are up for one final shootout before opting for early retirement.

Kronomyth 5.0: Jung and the restless.

Okay, so Sting holding a book by Carl Jung is the very definition of pretentious, I’ll give you that. But c’mon, critics: How can you give Synchronicity—an album that sold eight million copies in the US alone—three out of five stars? (You’d think they were pootin’ those stars out of their own stingy hiney holes.) Synchronicity is a great album by a great band that I admire greatly. And “Synchronicity II” is a great song. I even like the contributions from Andy Summers (“Mother,” which would have felt at home on a Robert Fripp album) and Stewart Copeland (“Miss Gradenko,” best thing he’s done since Klark Kent).

It’s the second side of the album, the Sting “solo” side if you will, that usually gets all the attention. At the time, I didn’t much appreciate being bombarded with “Every Breath You Take” every ten minutes, but these days even I have to admit it’s a brilliant ballad. “King of Pain” and “Wrapped Around Your Finger” are also terrific, the latter ushering in the literate, romantic age of Sting (“Fortress Around Your Heart” et al).

Although many critics will tell you the first side is uneven, I think the second side is too even. Not a lot of agitation, just gauzy guitar textures (apparently, Summers was still under Fripp’s hypnotic spell) plus some unremarkable drumwork from the normally fiendish Copeland. And for all the talk of filler, only “O My God” and “Tea in the Sahara” are dispensable in my book. I see Synchronicity as a mature, complex album from The Police that might be the smartest record seven out of those eight million Americans ever bought.